Wednesday 2nd April – Willowbank – After one of the driest March on record, April seems set to continue this trend. However, a blustery wind has sprung up and keeps everything down on Willowbank. A Robin hops along the bottom of a Hawthorn hedge. Willow Tits, with their smart black caps, work to and fro along the larger Hawthorns. A Chiffchaff hovers off the edge of an Ash before alighting and searching for food. A Grey Heron glides effortlessly across the hillside towards the River Dearne below. Some moron has been setting fires here, but fortunately it remains damp enough to prevent them seriously spreading.

Sunday 13th April – Westwood Country Park – A tongue of woodland lies between the A61 and the High Green road. It is probably outside the designated area of the Country Park, although this woodland is the West Wood. A public footpath leads into the woods in the bottom of the valley. Two houses are on the roadside at Westwood Bottom. One has a high, stone block built wall levelling the land above a stream, Storrs Dike. A fine display of Leeks grow in a patch, whilst the rest of the garden has a generous dressing of strawed manure. There are a number of dead Silver Birches in the wood. They seem to have a short life, dropped after maybe ten years or less by rot brought about by fungus. A few Celandines are in flower. There is a lush growth of grass across the floor of the wood. A Chiffchaff is hyperactive in a tree, calling and bouncing from twig to twig. A Robin watches quietly from inside a Holly bush.

Tuesday 15th April – Willowbank – The dry weather continues, and it is very warm as well, with records being set around the country. There are several male Bullfinches along the canal, slipping away at my approach. It is strange that closely related species such as Chaffinch and Bullfinch are so different in character; one jaunty and cocky, the other shy and retiring. The same applies to the Tit family with the secretive Willow Tit which disappears into the Hawthorn hedge as soon as I get close. My first Willow Warbler of the year is competing with the Chiffchaffs in the Spring song stakes. There are three Mute Swans on the Loop, one is last year’s brood, but not from this site as they failed due to vandalism. Dill the Dog gets a severe admonishment for barking at a horse on the tow-path. The horse in question is such a sorry specimen, that I call the RSPCA when I return home. Their national call centre knows where I am talking about as soon as I mention it. Hopefully, something will finally be done about it.

Thursday 17th April – Lambourne, Wiltshire – A small town famous for breeding and training race horses. The market square, with its cross, is overlooked by a large church, which is sadly all locked up. Beside the church is the façade of what may have been a school. A stone inscription around the front declares it was founded in 1502 by John Estbury and rebuilt in 1852 by Henry Hipplsey. A large HH is displayed in the brickwork. A brass plaque by the door is in gothic script Latin and I fail to decipher a single word. Beyond the gate appears to be a cottage. A wall continues up the pathway and now encloses a modern housing estate.

Ashdown Estate – As we head west along a valley in the Lambourne Downs, a magnificent chateau type house appears. This is the Ashdown Estate, now owned by the National Trust (and, with our usual luck, closed today). The house was built around 1660 by the first Lord Craven and consecrated to Elizabeth, Queen of Bohemia - The Winter Queen. The bottom of the valley is rough grazing with numerous limestone boulders scattered around. The opposite hill, Weathercock Hill, is also National Trust owned. There is a field system visible on the hill, associated with a nearby Iron Age settlement. A Green Woodpecker yaffles in the distance. Lambs gambol and feed from their mothers. We enter the adjoining woodlands that are mainly saplings as it has been ravaged by Dutch Elm disease and much of the mature trees are gone. Primroses and violets decorate the woodland floor. Blackthorn is in blossom and being visited by bees and Blue Tits, which should mean 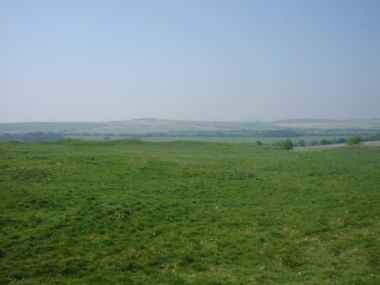 a bumper sloe crop. There is an avenue leading away from the house. Some distance along it, a small herd of Fallow Deer graze. Beyond the wood is Alfred’s Castle – the Iron Age settlement. There is little left after years of plough damage – a ring embankment with several apparent entrances. It commands excellent views over the surrounding countryside. We sit for a while and on rising, I place my fist on a patch of young Stinging Nettles with painful results (and itching for several days afterwards!) Peacock and Brimstone butterflies flit across the grassland. Dill the Dog manages a spectacular tumble off a stile landing flat on her back after bouncing off the step. She gets up, apparently unconcerned about it all. Back in the woods, she flushes a hen Common Pheasant. A cock appears and makes a considerable commotion, which may indicate the hen was on a nest. I glance around briefly but leave so as to cause the minimum disturbance.

Uffington Hill – We stop briefly at this popular site of the Uffington White Horse. A Red Kite drifts across the hillside, an increasingly common but still magnificent sight. 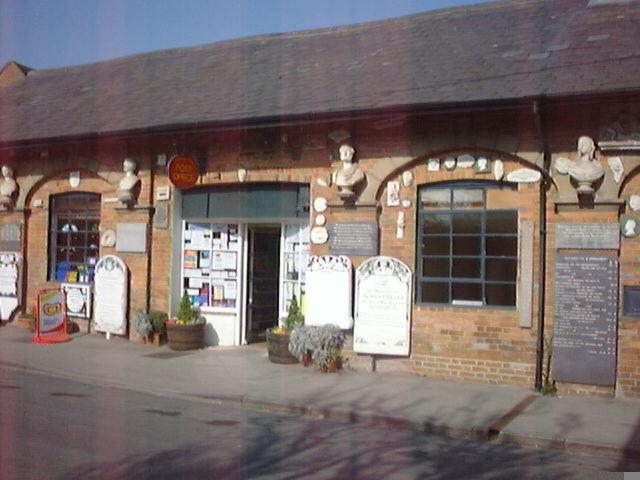 Great Bedwyn – We lodge at the Cross Keys public house in the village of Great Bedwyn, near Marlborough. An excellent hostelry which makes a considerable effort to accommodate my vegan diet. The village Post Office is a bizarre affair, covered with monumental masonry (from the adjoining masons). Busts, grave headstones and completely unfathomable pieces of carved and figured marble adorn its walls. A button is pressed to start a large Victorian cast iron fountain. Nearby the Avon and Kennet canal passes with its nemesis, the railway running along side. There are a number of boats moored here. Back in the village, we wander down a lane of mainly thatched cottages. House Martins wheel overhead.

Friday 18th April – Great Bedwyn – A morning walk along the canal. Butterburs grow in the grass at the edge of the water. Goldfinches, Greenfinches and Pied Wagtails abound. Kay and I disagree as to whether the latter are Willy or Wally Wagtails. There is an old diamond shaped, cast iron sign beside the bridge over the canal property of the Great Western Railway declaring the bridge is Insufficient to carry a HEAVY MOTOR CAR. There are various combinations of weight limits but the actual weights must have been declared on small plaques attached to the main sign, but these are missing. Up past the church a large manor house can be seen peeping above a huge hedge.

Wolf Hall – We drive through winding and narrow roads away from Great Bedwyn. On one bend stands a fine and ancient farm with many additional buildings from many periods. This is Wolf Hall Farm. Around the next bend a house lies almost hidden in the folds of the gently rolling land – probably Wolf Hall. It has extraordinarily tall chimney stacks of Elizabethan design. (I learn some years later this was the home of the Seymours, Wardens of Savernake Forest. Lady Jane Seymour became one of the wives of Henry VIII.)

Easter Sunday 20th April – Nunney, Somerset – Peter and I have a morning walk around the field with Dill the Dog and Jasper. The gorgeous sun and warmth has disappeared to be replaced with cloud and a biting east wind. Sky Larks and finches fly around the rather monocultured grass, although some more species are returning. In the corner by the wall of the big house, Bluebells, Jack-by-the-Hedge, Ground Ivy and White Dead Nettle all flourish on a stony patch of soil. We pass through a small arched gateway in the estate wall into the enclosure where Peter keeps three ewes, all of whom are heavily pregnant. They run up to greet us and one, Spotty sniffs at the dogs. Jasper is obviously used to this, but Dill the Dog looks aghast at things she is banned from getting anywhere near are allowed to sniff her!

The wind remains cool and gusty as the Easter Bonnet competition gets underway in the village square (not much of a square really, but useful enough). There is actually a category for dogs this year, but no-one told us, so only there are only two entries. The Duck Race is a bit of let down as Nunney Brook is very low, indeed Mallards are having to walk under the bridge. On the other side, folks are using garden hoses to try and get the ducks moving. We are getting cold and still have the Easter Egg hunt in the garden for Jemima and Lotte (OK and for the rest of us too!) Kay and I exchange eggs that have been in the boot of the car for a couple of days – melted down to chocolate blocks.

Monday 28th April – Barnsley Canal – After the prolonged dry spell, suddenly we have traditional April showers. The whole area has turned countless shades of green. Ransoms (Wild Garlic) and Jack-in-the-Hedge (Garlic Mustard) are both on flower, pure white against the brilliant green leaves. A Song Thrush sings even though it is mid-afternoon, but many other species are quiet.