Easter Monday 1st April – Nunney – The bitterly cold east wind blows across the Rack field. A Common Buzzard flies up from the small paddock where Pete and Jo’s sheep are kept. They are very rotund with pregnancy, due to drop imminently. I wonder if the Buzzard knows this and that is why it hanging around? A Ring-necked Pheasant flies off noisily. Back into the village and up High Street. The houses are built of pale yellow limestone. The fine Georgian Townhouse on the market square has, like several others, has been rendered. Up High Street past the large old Rectory, now a residential home. Well House stands opposite a cottage in a row behind which was a brewery. Still near the village centre is Cherry Tree Farm. Side Hill Farm was a small cottage built in 1731 but greatly extended in far grander style in 1741. The road now passes through the extensive 20th century housing, the first being built on the site of a sawmill. The street becomes Catch Road and we pass the village school built in 1896. Next door is the old Police House. On up the road. Celandines have flowered but look bedraggled but Primroses are a far more hopeful herald of spring, if it ever arrives! Tiny flecks is snow appear briefly. The Theobald Arms at the top of the hill is in a sorry, abandoned state. 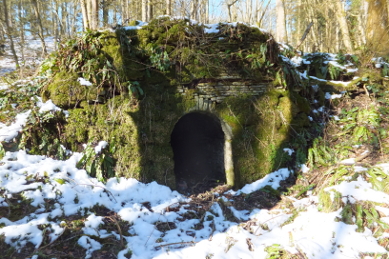 Tuesday 2nd April – Croft – A Jay flies up from the roadside into an Oak at the top of the Fish Pool Valley, then slips into the thick Ivy covering the trunk. Several small groups of Redwings also fly into these trees from the verge. The sun is bright but it is only a couple of degrees above freezing. There is a substantial flock of Redwings in the trees by the car park, twittering loudly. Snow still lies in the shade of the trees. Blue Tits chatter and Robins sing up the valley to the songs of Chaffinches and Song Thrushes but not surprisingly given the weather, no warblers. A few daffodils are coming into flower near the rustic shelter. The area around the old limekiln has been cleared. A Common Buzzard flies off through the trees. The path up out of the valley is coated in cracked, thin and soft ice. Water bubbles down the rill. Above the forestry track the path, where sheltered from the sun by conifers, is snow covered, ice where trampled by boots. Up onto Croft Ambrey. A Peregrine Falcon flies up the Leinthall valley. The Shropshire and nearby hills are patchy with snow but the tops of the Radnor Forest, the Black Mountains and Brecon Beacons are pure shining white. Good numbers of Chaffinches, Redwings and Starlings are feeding at the edge of the Spanish Chestnut field.

Wednesday 3rd April – Bodenham – Again the sun shines fiercely in a blue sky but the east wind chills all to the bone. Wigeon, Goldeneye and Tufted Duck are on the lake as well as the usual large gaggle of noisy Canada Geese. A thin layer of greasy ice covers part of the water. The cockerel is calling from the hillside. There is no sign of any life on the twigs and branches of the apples trees.

Leominster – I have finally bought the glass needed repair a cold frame we were given. I manage it with only one cut! In go the pots of broad beans and trays of lettuce and leek seeds. Despite the cold, the greenhouse is getting very hot in the sun. We head off to Hereford to do a bit of soft furnishings shopping. Just south of Leominster, a Red Kite bounces on the wind high over the road. 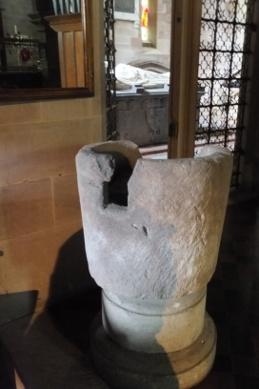 Friday 5th April – Ledbury and Eastnor – From the station, The Homend, leads south lined by fine Victorian villas. Closer towards the town centre, old yards and alleys lead off the road between the houses. Plaques indicate their old names, Ward’s Row, Dew’s Yard, Bill’s Yard, Smoke Alley and many others. Up into suburbia and then up a ginnel into Dog Hill Wood. Paths run around and up through the woods. Robins sing and a woodpecker drums. The clouds thicken and the wind increases. Down the eastern side of the wood and past a couple of paddocks. A horse comes to say hello, and Maddy attempts to bark with her ball in her mouth. Past a pond that is rather green with algae despite the freezing conditions of late. The path emerges at the entrance to Upper Hall Estate. Nuthatches call from overhead branches. I pass a few moments with a passer-by. She curses the lazy wind that has forgotten to close the gate and go. She thinks summer may be on a Wednesday this year but says she has been told it would be a Thursday – hopefully both and in the same week! Down the Worcester road and then up a path of wide steps down which flows a stream. On up the path through a small grove of Yews in Coltham Wood. Two woodpeckers drum only short distance apart with very different timbres. Up more, steeper steps and then follow a sunken track-way. The track emerges into a field alongside the wood. Long-tailed Tits flit through a multi-trunked Oak. The track crests the hill at Dead Woman’s Thorn. Legend says that a woman hung herself from a Hawthorn tree here, but documents show the older name was Deddyman’s Thorn. Beyond is Eastnor Hill and on the northern horizon stand the Malvern Hills still piebald with snow. A Common Buzzard mews.

Across to another field. The track descends from the woods to Eastnor. The village is part of the Eastnor Estate, known these days for the early 19th century Norman revival castle. A manor house called Castle Ditch was here before the castle. This house was in the ownership of the Clintons in 16th century. A few years later the Cocks family moved to Eastnor and bought the manor. They married into the Somers family. A fine, large rectory stands beside the church. The church of St John the Baptist was mediaeval in origin but apart from the tower was completely rebuilt in 1852 by George Gilbert Scott. A very ornate font stands just inside the door. Opposite the entrance on the north wall is a marble was 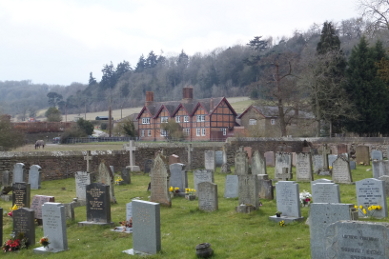 memorial with a polychrome picture of St George. The pulpit is in carved marble. To the south is a family vault of the Cocks, dominated by a large tomb of Charles Somers Cocks, 3rd Earl Somers who died in 1883. Other tombs lay recessed into the walls. On the floor are stones dating back to 1636. By the entrance to the crypt is an ancient font which was found under the floor during reconstruction in 1852. The base is 14th century but the bowl is earlier, probably the oldest in the county. It is large so that babies could be fully immersed. A clasp and lock was once fitted. All fonts from the middle of the 13th century up until the Reformation were locked by order of the Archbishop of Canterbury in 1236, as a safeguard against sorcery, and possibly also to prevent hedge priests from secretly baptising babies at a fee lower than that of the Parish Priest. The staples for locking the font were removed during the Reformation. More large wall tombs of the Cocks stand in base of the bell tower. Back outside, the constant calls of pheasants ring around the village. A track runs past the estate offices, Eastnor Farmhouse, a late 17th century building, and a pottery, which says open but the door is blocked. The track rises between Bircham’s Wood and Squirrel Hill Wood. A turning drops down to a pond from which a Grey Heron flaps away. Through a field of Ring-necked Pheasants and a quietly departing Jay and back into woodland. This is the wrong way! A quick retreat and off up the track to the right path. Across a field through a farmyard, The Holts and down another field to conifer and hazel woodland, Coneygree Wood. Pheasants and buzzards continue to call. Through woods following unmapped paths. A path runs along the edge of Ledbury Park, an old deer park. At one point the old park wall stands, or rather, is falling down. A flock of Siskin is heard but not seen. Primroses and Dog Violets are making an appearance and in one spot what look like wild daffodils. A Marsh Tit squeaks by the woodland edge along with the now inevitable drumming woodpecker. A gnarly old sunken footpath brings me back down to the original path and the main road.

Sunday 7th April – Leominster – And still the cold continues with a heavy frost again. Three Canada Geese, hardly a gaggle, fly up the railway, honking of course. My first singing Chiffchaff of the year is calling from near the railway. The Starling roost had moved to a tree behind the Grange Café, but seems to have gone now. Wood Pigeons seem even noisier than usual this morning. River is higher than expected given there has been several days without rain, maybe snow is still melting. A Common Buzzard sits in tree beyond the bridge. Great Tits chase through the Alders by the river. The market is larger than in recent weeks. Still mainly junk though. Robins and Blackbirds sing. In 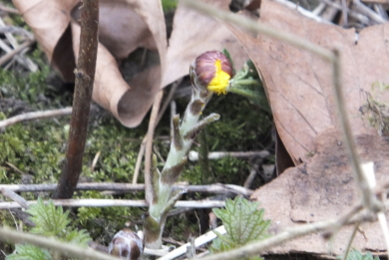 Etnam Street, a pair of Jackdaws are gathering twigs from the gutter and fly off with beakfulls.

Monday 8th April – Croft Ambrey – The thermometer claims 4°C but a north wind makes it feel colder. Rooks caw, Jackdaws chack; Robins, Song Thrushes and Great Tits are all declaring their territories. The woodland in the Fish Pool Valley is littered with broken branches, victims of the recent snow. Coltsfoot, Primroses and Saxifrage are coming into flower. Wild Garlic has finally sprouted. Up on a cold, grey Croft Ambrey, scarlet hips are still on briars. Snow lingers on the north facing slopes of the ramparts and Leinthall Common. It is hazy across the hills.

Wednesday 10th April – Bodenham Lake – Another overcast morning but it is slowly getting milder. A Red Kite is gliding over Ford Bridge on the A49 – probably the bird we see every time we travel this way these days! A Green Woodpecker is yaffling loudly in the dessert apple orchard. The lake holds a few Wigeon, a good number of Tufted Duck, Mallard, half a dozen Goldeneye, a few of pairs of Teal, 8 Cormorants on the pontoon and a further 20 in the trees, none in breedin