Thursday 1st April – Blenheim Palace – North-west of Oxford lays Woodstock and Blenheim Palace, seat of the Marlboroughs. Winston Churchill was a Marlborough and was born in the palace. It was built in various stages starting in 1705 when it was a gift from Queen Anne to John, First Duke of Marlborough for his military successes against the French, Bavarians and Spanish Netherlands. In front of the palace lies a great lake and extensive woodlands. Many trees are old and contain broken branches and holes for Starlings, Jackdaws and Tits to nest in. In one small area of woods we watched Great Spotted Woodpeckers, Treecreepers and Nuthatches. The fields contained Brown Hares and numerous Ring-necked Pheasants. All over the estate sheep grazed with their lambs.

Good Friday 2nd April – Vale of the White Horse – Across the vale, dotted with small villages of thatched cottages and larger country houses, all built of the same pale cream limestone of the Cotswolds. On the side of the Cotswold Hills is the Uffington White Horse, the oldest and strangest chalk cut horse in the country. Its surreal design seems more 20th Century than Neolithic. A large Neolithic fort rings the nearby hill top. Lower down is a conical chalk outcrop that has been artificially flattened. This is Dragon Hill, supposedly where St George slew the mighty serpent.

The Sanctuary – West of Marlborough, on the A4, is a significant site of antiquity. Nothing remains at the Sanctuary at ground level. Excavations though have revealed there was wooden construction here 3000BCE. It stood next to the Ridgeway and may have been a temple or a charnel house that housed corpses before they were taken to the great tomb at West Kennet. In 2700BCE a much larger hut was built. About 2500BCE an even larger circle of wooden circles replaced the hut. Finally, around 2000BCE the wooden ring was replaced by a stone ring and an avenue of stones leading to Avebury Ring some distance away. From here, Silbury Hill can be seen. This huge artificial hill was built in 2700BCE for a still unknown purpose. Over the road, the Ridgeway heads for Ivinghoe Beacon, 85 miles away. Along side the track are round barrows, Neolithic burial chambers. Avebury village is partly built within the huge stone circle – the local pub advertises itself as the only bed and breakfast in a stone circle. The place is very crowded with tourists, which rather dampens the mystic power of the site.

Saturday 3rd April – Nunney, Somerset – Jackdaws are nesting noisily around the church and castle. The stream bubbles and chuckles through the village. The majority of the Mallards are drakes, which presumes the ducks are nesting on the island nature reserve. Further upstream water gushes down from the millpond in a force. A Dipper flits from a rock onto a streamside bush and then off. Young calves stand in the field with their mothers watching the dogs warily.

Easter Sunday 4th April – Nunney – Across the fields with Buster and Dill the Dog. She soon decides a good roll is in order, pity about the muddiness of the field. A small bridge crosses Nunney Brook beside a ford. The woods ring to the calls of Chiffchaffs, Robins, Wrens, Blackbirds, Tits, Chaffinches and Goldcrests. The last is displaying, a brilliant flash of fiery orange along its head. The woods are pungent with the odour of Ransoms – Wild Garlic. White Anemones and Bluebells brighten the woodland greenery. Dill the Dog is in Nunney Brook, although this does little to clean her. Later in the morning, the Easter Bonnet Parade takes place in the Market Place, Daffodils in abundance. This is followed by a duck race – several hundred yellow plastic ducks released into Nunney Brook and everyone chases down the village to the finishing line. The local Mallard take a pretty dim view of these proceedings. 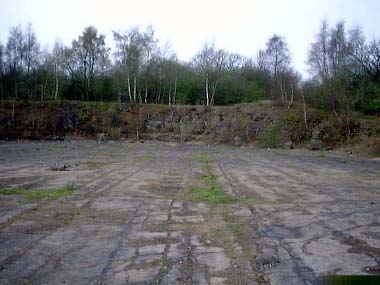 Easter Monday 5th April – Tedbury Woods – Peter, the dogs and I set off through the well-managed woodland. There is a large Scout camp in here. A family is clearing undergrowth and thinning the Birches. Chiffchaffs are calling from every direction. Bullfinches meep quietly and slip off through the young trees. Wild Arum leaves are thick on the ground. Mosses and fern cloak old Oaks. The wood clears above the fossilised seabed. Song Thrushes sing around the edge. Clumps of Primroses bloom in the woods below. Willow Warblers feed frantically on Willows appropriately.

Chichester – A large flock of Sand Martins are swirling low over the flooded gravel pits.

Friday 9th April – Willowbank – Bright sunshine gleams off the newly unfurled leaves on the Hawthorns. Chiffchaffs and Willow Warblers are in full song.

Sunday 11th April – Little Don Valley – Grey mountainous clouds, tipped in glowing white, slide across the Pennine tops. The valley is springing into verdancy. Shaggy black-faced Sheep are feeding on the steep sides and bottom of the valley. Chaffinches call and chase through the gnarled old Oaks and Silver Birches. Willow Warblers and Chiffchaffs sing in the dense conifer plantation. The river is fairly placid, rippling through the gritstone landscape. The moors are crossed by wide firebreaks and dark square patches of burn-off. Pink female flowers are emerging with bright green leaf fans on the Larches. The confluence of the Little Don with Mickleden Beck is filled with sound – keening Curlews, rasping Mistle Thrushes, the descending song of Willow Warblers, pinking Chaffinches, cawing Crows high overhead, twittering Blue Tits and Quick, quick, go-back, go-back, go-back warns the Red Grouse. A Goldcrest moves rapidly through the Oaks, seeking insects.

Wednesday 14th April – Barnsley Canal – The weather has been classically late spring style over the last two days. Yesterday as I drove across North Lincolnshire there was a vast wall of grey-black cloud with columns of rain falling to the unnaturally sharply focussed land below. As I hit the wall of torrential rain sweeping the motorway, it turned to hail. This morning the sky is mainly covered with high nimbus clouds. Underfoot is a heavy frost. Chiffchaffs, Willow Warblers and a Blackcap sing from the large Hawthorn thicket down Willowbank. Robins take their sentry posts at the top of the highest trees and pour forth the territory defining song. Blue, Great and Long-tailed Tits move through the bushes, either singly or in pairs. A Bullfinch slips quietly away.

Saturday 17th April – North Norfolk – I look out of my bedroom window at 5:30 and I am actually pleased to see it raining – yesterday it was snow! The rain decreases the further south I go. Thus, it is a pleasant morning when I arrive at the Rose and Crown in Snettisham, where Jerrie, her daughter Pattie, Tony, Jo and Moira are staying. Jerrie sets the tone as far as Dill the Dog is concerned by saving a sausage from breakfast for her.

Titchwell Marsh – We set off for Titchwell Marsh where we meet up with JJ and Paul. Blackcaps are singing near the car park, but I do not see it. We head off onto the reserve. We can hear the blood-curdling call of Little Grebes before we see them. We steadily work I way down towards the sea, scanning both sides of the path. We now know that Bill Elrick has run into difficulties in Washington and apparently has to go to Denver to catch a Britain-bound flight. However, the plans have been saved by Steve and Denise collecting him from Gatwick and then heading to Norfolk. We settle into the hide and watch Avocets sieving the mud just outside the windows. There are Brent Geese, Greylags, Shelduck, Gadwalls, Mallard and Tufted Duck in good numbers. We find a few Shoveler, Pintails, Teal and a single Wigeon. The Black-headed Gulls, who seem to live just to make the maximum amount of noise, are pairing and squabbling on every available islet. There is also a pair of Mediterranean Gulls mating in the gull flock. Marsh Harriers give wonderful views as they soar over the reed beds. We catch sight of our first Swallow of the year. There are limited numbers of waders, a few Redshank, Ringed and Grey Plovers and a Ruff. We move off down to the beach. Off shore there is little happening, a few Great Crested Grebe diving. Sanderlings chase along the shore at the water’s edge. A few Dunlin probe the sand and Turnstones inspect an area of weedy rock. Back up the marsh we decide to try and find a Bearded Tit. We can hear a Sedge Warbler singing and some see it as it occasionally pops up from the reeds. By watching the reeds carefully, we see the odd reed move unnaturally – concentrate on that area and suddenly chestnut and powder blue flashes through the reeds – the Bearded Tit. We get no good views.

Wells-next-the-Sea – Off then to Wells-next-the-Sea for lunch. It is now raining heavily. Towards the end of lunch Steve, Denise and Bill finally join us. We have a look in the harbour, finding a Greenshank and try to turn Black-headed Gulls in Mediterraneans and a Curlew into a Whimbrel.

Holkam Hall – Next stop is Holkham Hall. We move slowly through the woods and find Nuthatch, Jackdaws and Great Spotted Woodpecker. We can hear Green Woodpeckers. At the lake there are Egyptian Geese with young and Bill demonstrates to the Brits what a first class birder he is by picking out a Scaup from the Tufted Duck. House Martins and Swallows feed over the water.

Titchwell Marsh – We then head back to Titchwell to find the Mediterranean Gulls for Bill. It comes as no surprise that we fail and most of us are near to frostbite searching the flocks of Black-headed Gulls in vain. We do find a Little Stint though, and it again, comes as no surprise that it is Bill that finds a superb Barn Owl hunting across the reed beds. This caps off a day where I have recorded 76 species and other folk probably have more.

Sunday 18th April - Wombwell - Bright sunshine sparkles on a soaking wet landscape. The disused railway is chiming with singing Robins, Song Thrushes, Dunnocks, Greenfinches, Willow Warblers and Chaffinches. The path is now cut by the Dearne A1/M1 Link Road and is choked with Broom. The old road, now abandoned is deeply flooded where the railway bridge has been removed. A Yel