Monday 2nd August – Barnsley Canal – It is more like October than the first week of August. A mist lies on the hills but it is quite warm. A young Dabchick dives in the canal. A small group of Mallard fly overhead. Ragwort is peaking with its yellow flowers everywhere. A few Birdsfoot Trefoil are still flowering beside the path. Chaffinches are pinking. Green Elderberries and Rose hips are swelling; some Haws have already turned red. I attempt to uproot some of the invasive Japanese Knotweed, but it is too strong, but at least I manage to break it down. Another Dabchick is calling somewhere down on the Loop.

Wednesday 4th August – The Fleets – The Sparrowhawks are calling. One flies over the river carrying something in its claws; possibly a Blackbird. Over the Willow carr, two of them chase off a Magpie. They normally ignore the Magpies that sit around them trying to provoke them, but it would appear that when they have the numeric superiority they see off the irritant. The lake has reopened for fishing, but water is still being pumped in from the Dearne.

Home – There are still shrieking groups of Swifts scything their way across the evening sky.

Saturday 7th August – Silkstone Fall – The days of wet heat has accelerated the development of fungi and there is a good range of species growing. A Crossbill is calling from the top of the pines, but I fail to locate it.

Wednesday 11th August – The Fleets – After 24 hours of nearly continuous rain, brown water roars over the weir on the River Dearne. Himalayan Balsam and nettles bow under the weight of water drops and bend over the path, making my legs wet as I pass. A Sparrowhawk is still calling from a dead tree in the willow carr. The lake is full and hopefully well oxygenated. The road under the bridge on Smithies Lane is flooded.

Thursday 12th August – The Fleets – It has stopped raining and the Dearne’s level is dropping slowly. Everywhere is still wet. There is now only a single and occasional call from a young Sparrowhawk. There is a mist hanging over the lake and the hillside is obscured. A lone Black-headed Gull patrols the water.

Friday 13th August – The Fleets – Yesterday morning and early afternoon were just a brief respite from the rain. It continues this morning. The River Dearne is, of course, still high and water gushes out of the culverts by the bridge. The rain eventually stops around lunch time. In the afternoon, over a dozen finches sit in two rows on electricity wires.

Wednesday 18th August – Barnsley Canal – The tow-path is treacherous underfoot, slick and sticky at the same time. Blackberries and Elderberries are ripening. The sun makes a fleeting appearance through the rain laden clouds that are moving over. The drift of Michaelmas Daisies is still bright mauve. Tansy and Ragwort, however look dull and tired. Young Whitethroats are in the bankside Hawthorns. Magpies are noisy up on Willowbank.

Home – A noisy group of Long-tailed Tits move through. At last, the greenhouse tomatoes are setting fruit. The outdoor ones are still small and it will be surprising if they produce anything. The lower patch potatoes were struck by blight, so I remove the haulms and leave the tubers in the ground. There are a few more Broad Beans to pick. French Beans are producing well now and Runner Beans are not far behind. I sow a row of early peas, Douce Provence in the hope of an autumn crop.

Saturday 21st August – Barnby Furnace – The rain has stopped, albeit briefly. It has been the wettest August on record and there is little sign of the wet weather ceasing. A large flock of Linnets are feeding in a stubble field. They fly briefly into the hedge and small trees surrounding the field then back into the stubble where they vanish from sight. A Yellowhammer sits in the hedge. There is warm sunshine; very welcome. Some fields have already been ploughed. The track down to the road is now a small stream.

Thursday 26th August – Silkstone Fall – The wind rustles the trees. A Carrion Crow calls harshly. There is the occasional squeak and whistle from tits deep in the woods. Earthballs and The Deceiver fungi are prolific, which is hardly surprising as the soil is sodden.

Sunday 29th August – Winster, Derbyshire Peak District – A village south of Bakewell, Winster lays in the White Peak district of Derbyshire. We stayed on a campsite 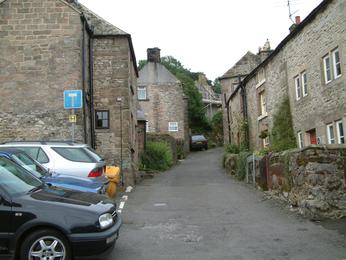 behind the Miner’s Standard public house. Near the pub, passes the Limestone Way. It was previously called the Portway and was an important and ancient trade route. Other ancient routes included the Salt route from Cheshire and more recently, the 18th century turn-pike from Nottingham to Newhaven which passed through the village. The abundance of lead ore in the district also was important in the development of the village. The earliest inhabitants recorded were from the Iron

Age. Two burials were discovered in 1856 in the garden of The Manor. An Anglian barrow on Winster moor called White Low had been dug in 1756. The Domesday Book records Winstern which probably means Wynn’s Thorn Tree. The village is something of a maze of houses across the hillside, many the habitations of the lead miners, with some splendid 18th century houses on the main street where the mine owners and tradesmen lived. There is a fine Market Hall in the main street, now owned by the National Trust. Flooding was a constant problem and the last mine closed in 1938. The pub’s name, The Miner’s Standard, comes from a wooden dish that measured a standard amount of ore. The pub was built as a farm house in 1653 by the Parker family. It became an inn in 1753 and on the wall is a continuous record of publicans from that date.

Parwich – We had a Sunday morning walk from the village of Parwich towards Tissington. The path rose and fell as it crossed several valleys. The recent rainy weather meant there was a fair amount of mud to contend with. A field was occupied by 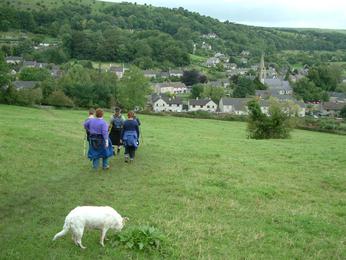 some mighty beef cattle, which despite some very suspicious looks at Dill the Dog, left us alone. The path rose though a stony and wet scar in the hillside. A fallen tree was host to a dense mass of fungi, Trooping Crumble Cap, one of the coprinus family, although these do not autodigest as do the other family members. Down another hillside and a small flock of Mallard greeted us. They shuffled off, away from Dill the Dog, still grabbing a beakfull of vegetation on their way. Up the next hill, Puffballs emerged for the grass and at the top there were some fungi that looked very much like Field Mushrooms, but they were under the awning of woodland trees. The trees stood on the side of the embankment of an abandoned railway, now a popular footpath. It was noticeable that a number of flowers, such as the Willowherbs, Ragwort, Harebells and fruit such as Blackberry were some way behind those in Barnsley, despite being further south. We left the railway and headed back down the valley side. Field Champignons formed disjointed fairy rings. A particularly large Horse Mushroom was growing in a sheep field, with a strong stock fence between it and me. Some of the stiles were stone squeezes and proved a challenge to the less lithesome of us. It was with some pleasure the village of Parwich was sighted again nestling in its valley – and even more pleasurable that we got to the pub just before a sudden downpour of rain.