Sunday 1st August – Leominster – Rain fell at dawn but has since stopped. Everywhere is wet, leaves shine in the morning greyness. The recent rain has had no effect on the water level of the River Lugg, which if anything is lower still. The water splashing over a small rock weir (which seems to have been recently built, by children I assume) is the only sound to be heard, all birds are silent. Finally there is some twittering and tweeting from Blue Tits and a Robin emits a burst of song. Tiny corpses of flies hang in a large spider’s web attached to the metal framework of Butts Bridge. Burdock is about to come into flower, their spiky heads waiting for a dog to brush against and carry them away. Wood Pigeons start coo beside Easters Meadow. Something has set off the seagulls away to the south; their noise often continues all night.

Round to Pinsley Mill. Swifts are notable by their absence, but of course as soon as I observe this one flies over. Into the Millennium Park. The cider apples are swelling and gaining a crimson blush. In the strips of Meadow 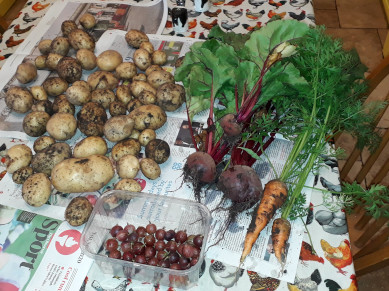 the Meadow Cranesbill and Greater Knapweeds are coming to an end but the bright pink Red Hemp-nettle is still in flower. A bee visits but appears to find nothing to detain it. Small four-chambered fruits, still green, are appearing on a Spindle. The water level in the River Kenwater remains low.

A good number of young Blackbirds are seeking food in the churchyard grass. The Minster bells toll the hour followed by the Compline bells.

Home – More Kestrel potatoes are dug, not a bad crop. I harvest a couple of carrots and beetroot for dinner. Some of the gooseberries on the straggling bush on the western side are ripening, so I pick a few and leave the others for a few more sunny days.

Monday 2nd August – Ashperton-Munsley – The main A417 road to Gloucester is still closed at Stretton Grandison. So I take the long way round to get Trumpet and turn back towards Ashperton from the opposite direction. From the church I return to the A417. Most of the houses in the lane are modern. On the main road a house faces the junction at an angle. It was formerly the Box Bush Inn, a late 18th century building possibly with an older core. Towards the school, again there are a number of modern houses but also some older timber-framed buildings, including one which is possibly from before the 15th century. Opposite the school is a Heywood lane which heads towards Bosbury. Hedge Woundwort, Greater Willowherb, one of the Hawkbits and a few umbellifers flower on the verge. A field of golden winter wheat has has a sign indicating it is lot 1a of straw.

The lane passes a pair of modern houses and a cider orchard. A thatched timber-framed 17th century cottage has been divided into two dwellings. Behind them is a large field of maize, opposite another large orchard. The lane begins to descend and turns southwards. East of the bend is a cricket pitch and pavilion. Beyond the roof of Walsopthorne, a farmhouse of around 1600, can be seen. Although named Walsopthorne it is also known locally as “Wassington”. In the Domesday book Walsopthorne warranted a separate entry as WalesAlpedor meaning Waltheof’s Appletree. After the Conquest it is recorded as land of William son of Baderon (the keeper of Monmouth Castle). In early mediaeval times, the Criketot family were the resident sub tenants. They can be traced until the mid 14th century, though for a time the land was forfeited as a result of the Criketots participation in the rebellion of Roger Mortimer. 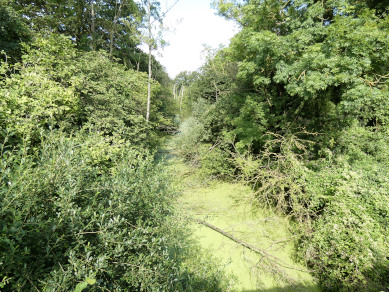 After changing hands several times, Walsopthorne was owned by the Philipps family and by their heirs, the Stocks of Putley court until 1823 when, by arrangements with the Hopton estate of Canon Frome, it was exchanged for Hall Court Kinnerton. It remained part of the estate until 1961 when it was bought by the then tenants, and current owners, the Davies family. On along the lane. Yarrow flowers on the verge.

Tunnel Cottage has a plaque stating “Tunnel House, Munsley, Hereford and Gloucester Canal 1841”. To the east of the cottage is a deep drop down to the canal where our enters a tunnel under the cricket pitch. Across the fields to the west is a hopyard. The next field has black and white cattle. A Yellowhammer calls. Back on the eastern side is a considerable vertical drop down to the canal. The lane comes to a modern house at the entrance to Moorend Farm which has a large 17th century timber-framed farmhouse, altered and 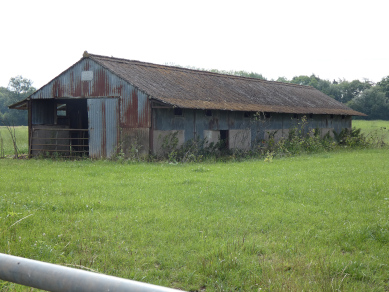 extended late 18th or early 19th centuries. The lane turns east and crosses the canal by a bridge. The canal to the south can be barely seen through the thick growth of Willows.

Another Yellowhammer sings from the top of a corrugated iron barn fabricated by F H Dale of Leominster. A hidden woodpecker is hammering at a large Ash. Upleadon Court is a fine three storey Georgian house. Beyond the lane rises to Hansnett Wood. A large flock of Rooks flies up from a wheat field. The Malvern Hills dominate the view to the south east. Across a field is a strip of woodland of Oak and Ash with a large Weeping Willow in it.

The lane divides and I head along through the strip of woodland to Munsley. Whitethroats make a tapping sound in the hedgerows. Over a small stream, Stoney Brook, that was once beside the canal. A large house, Swinmore Farm is hidden in trees. A large red brick barn and oast house has been converted. Opposite is a small water filled quarry. Meadow Brown butterflies feed on thistles. One has a lump out of its wing. Past a patch of woodland busy with Blue and Great Tits, Wrens and Chaffinches. A large number of broken Hazelnut shells last in the road. A timber-framed cottage, Shirkway Farm, has a splendid garden.

The lane joins a larger one, the Munsley to Bosbury road. It is getting warm despite the clouds. Munsley Court is a farm with a brick farmhouse, oast house and artesian well, not working sadly. A Victorian postbox is in a barn wall. A small lane runs northwards. A red dragonfly, Common Darter, Sympetrum striolatum, rests on the tarmac. A little further on is a similar dragonfly with a blue-grey body, a female Common Darter, I 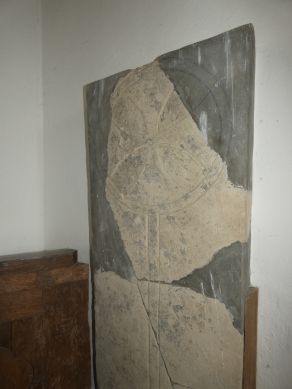 think. The lane comes to Lower Court and Munsley church.

The church of St Bartholomew is 12th century. “Moneslie” can be found in the Domesday Book, so the present church was probably built on the site of an earlier timber Saxon building. The building was restored in 1863 but retains many original features. The windows are typical Norman, 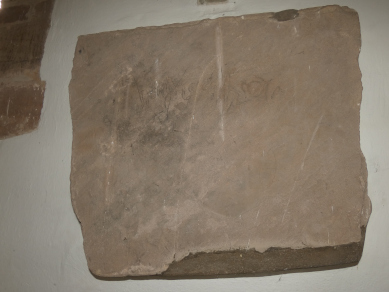 small slits, splayed inside to admit as much light as possible. The chancel arch is a simple Norman arch. The font is 15th century as is the doorway. The original Norman doorway on the northern side has been filled in. The church has a mid 19th century bellcote. Some of the glass is mediaeval. There are a number of monuments on the walls, including a stone inscribed “‘HAMLET XHETI’ or Hamlet the Jute with the date AD 362”. A pair of mediaeval gravestones with pre-Christian crosses are fixed to the wall of the chancel arch.

The Lower Court is a large house, A mill with a pond surrounded by Weeping Willows and sleeping Mallard. The house is built on what is thought to be a motte. A track, Nupend Lane, runs around the side of the house and through the fields. A lake lies hidden in trees. The track becomes an overgrown path on the edge of a field of oats. Into the yard of Nupend farm. A large farmhouse had an oast house attached with a set of sandstone steps rising over an arched entrance to an upper level. Three large corrugated iron barns of White House farm stand by the lane. A large timber-framed 17th century farmhouse had a converted oast house attached. The lane leads to the A417 past an orchard.

Up the main road. The large Royal Oak pub has closed and is for sale. The school has been extended in the late 20th century and rather ridiculously called a Primary Academy, as though there was something wrong with the word school. The old part has fine blacksmithed hinges on a door. Opposite, Linnets sing in the hedgerow. Route