Friday 2nd December – Barnsley Canal – It has rained throughout the night and everywhere is sodden. Most birds have sought shelter. Magpies and Wood Pigeons are still flying around and a Jay bobs along to the shelter of a Hawthorn. A Blackbird sounds the alarm, but who is listening?

Saturday 3rd December – Newcastle and Gateshead – After staying overnight at a Formule 1 hotel (basic but good value!) we catch the Metro to Gateshead. The town rises up the south bank of the River Tyne. The origin of Gateshead is obscure, it may have meant head of the (Roman) road. The Venerable Bede writing in History of the English Church and people in 653 says As I have said, Adda was brother of Utta, a well known priest and Abbot of Gateshead (or Getehead). Gateshead was the scene of the notorious murder of Walcher, first of the Norman Prince Bishops in 1080 by a Saxon mob angry about the murder of Lyulph of Lumley. This led to a Saxon uprising which was brutally suppressed by the Normans. We head down towards the river. It is clear here that Newcastle and Gateshead were built on the Tyne gorge, the steepness of the hills either side are illusive until one climbs or descends them. Still close to the top is St 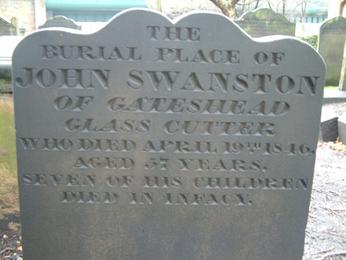 Mary’s Church, now the Visitor’s Centre. The graveyard contains many graves of the 18th Century. The graveyard ceased to be used around 1854 due to repeated cholera outbreaks. Much of the original graveyard was removed when the Tyne Bridge was built from 1925-28. More was removed to provide a car park in the 1990. It was then that a mass grave of cholera victims was found – in a particularly unsuitable place as the bodies 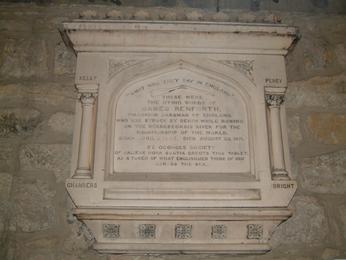 would infect the water of the Tyne which was the source of drinking water for the residents of Newcastle and Gateshead. This would explain why there were repeated outbreaks of the disease in the mid 19th Century. Some graves note the occupations of the deceased – inn keeper, glass cutter, rope maker and gardener. The church contains a couple of interesting plaques. One is in memory of Charles Bertram JP, Who was accidentally killed in the great Fire and explosion in Hillgate, Gateshead. On the 6th October 1854. Another is dedicated to James Rensforth, a native of Gateshead and champion oarsman of the world. He was struck to death whilst rowing on the Kennebecasis River for the world championship at the age of 29. The plaque records that his last words were What will they say in England? A third plaque remembers Barbara Coulson who died December 16th 1813 aged 80. She kept the inside of this church clean for 50 years. 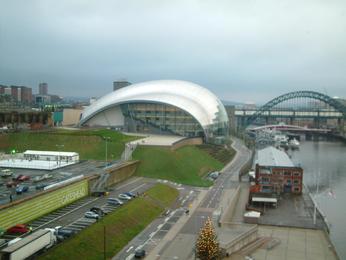 We then descended the hill to the massive Sage Centre. A great rolling construction of bright steel and glass houses several concert halls and performing arts space. Down by the river stands the Baltic, a flour mill now housing a major art gallery. The display was of British Art – too many installations for my taste and the 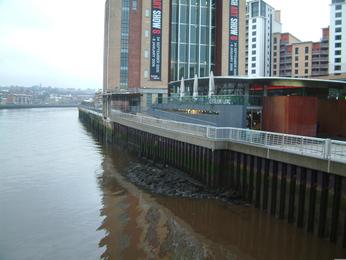 meaning of a piece of white melamine wood shelving held up by a couple of brackets with a burned out match stuck to it somewhat escapes my appreciation. From the Baltic we crossed the Tyne by the curving Millennium Bridge. From the bridge, three blackened stumps rose out of a spit below the riverside wall beneath the Baltic. This may be the last remains of the old docks. We then headed up into Newcastle to the Crown Posada, possibly the oldest pub in the city – a very narrow building with glorious stained glass windows at the front (and a splendid selection of real ales!)

Thursday 8th December – Silkstone Fall – It has been a week of mud. Although it has grown colder as the days passed, the ground is still sodden and the air wet. I am collecting tinder and larger pieces of fallen wood for the fires. Since having the stoves fitted properly, there is a decent sized space either side of the stove in the green room to put the saturated wood to dry. The Greenfinches and Tits are emptying out the feeders at a fair rate.

Friday 9th December – Barnsley Canal – Last night there was a heavy frost by nine o’ clock. The grass and leaves on the old reservoir site across the road crunched underfoot. This morning it is milder but the ground remains frozen. The canal tow path is rutted and hard. Dill the Dog hates walking on it and tries to trot along whatever grass verge she can find. There are very few winter thrushes around now; there are very few haws left on the Hawthorns which would explain it. A pair of Teal explode out of the canal from under the great old Willow that lies low across the water.

Sunday 11th December – Grange Gate – The absence of bird song is noticeable this morning. It is mild and bright, but the only calls are the incessant chattering of Magpies.

Monday 12th December – New Swillington Ings – A bright sunny morning. A quick glance over Astley Lake reveals a number of Shoveler preening on a sand spit, a pair of Shelduck, some Mallard, Coot, Lapwings, Pochard and a Little Grebe. The track leading to the bridge over the River Aire is lined with Wayfarer bushes with their scarlet berries seemingly untouched by birds. A female Reed Bunting watches from the bushes. On the river, above the weir there are a number of Goosander, Tufted Duck and Mallard. Further down, a pair of Teal glide along by the bank. Where the Aire and Calder navigation joins the river is at least one hundred Tufted Duck. Goosander fly down the river. To the north is the site of St Aiden’s Flood where the banks of the River Aire burst through to a vast open cast pit in 1988 and flooded the whole site. For several years it was teaming with wildfowl in the winter, but then it was drained and coal mining recommenced. Now the whole site has been restored and consists of water channels weaving through marshy grass banks. There appears to be no viewing sites, but I can see good numbers of duck on the distant water. Over a footbridge and back along the other bank of the Aire. A Chaffinch pinks at me. Mute Swans upend in the river to feed. A female Bullfinch flies to the base of an Elder and is picking at the branches. Gorse is in flower, a bright yellow reminder of the warmer season which seems so long ago, especially as a wind has arisen from the north and it is decidedly chilly. A Grey Heron glides over the river and is gone.

Tuesday 20th December – Home – The days rush past as Christmas approaches. Some are cold and bright, more seem damp and grey. In the garden, a double row of Broad Beans and two of peas have popped up and a few garlic have sprouted. I always worry about the garlic at this point, but usually by Spring they have all pushed up a green spike. The feeders are devoid of bird life. A Robin sings in the trees.

The Fleets – There is a slight drizzle in the air. It is not cold so I am surprised to see that there is a frozen area at the end of the lake. It is obvious because there is a flock of Black-headed Gulls standing on it. More fly in, tipping their wings to release air and drop lower onto the ice. Others are bathing in the water beside the frozen section. A Moorhen scurries across the horse paddock. A pair of Magpies fly in perfect formation before splitting high above the trees.

Friday 23rd December – Barnsley Canal – A mild bright day. The moon is still high in a clear blue sky. Two airplanes fly in parallel leaving long vapour trails. A Treecreeper scurries around a small Ash tree, its pure white breast gleaming. Above, Long-tailed Tits tumble like acrobats among the branches. A Wren ticks in brambles. Across the valley from the tow-path, I can hear at least two Green Woodpeckers calling. At first one is down beyond the Loop near Smithies Lane, whilst the second is over near South Gawber stack. A couple of minutes later, either another bird or the first has moved up to a stand of trees north of the Loop and is calling loudly. Jays are becoming common down here and the white rump disappearing into trees and thickets is a frequent sight. 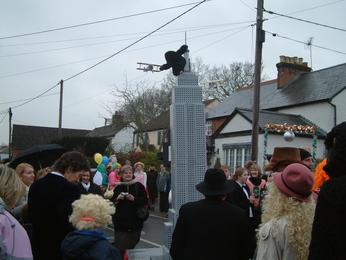 Boxing Day - Monday 26th December – Windlesham, Surrey – Kay is taking Tom to Brighton, so David, Nathan and I head to Windlesham for the Boxing Day Pram Race. It is cold and damp but a pint helps take the chill off. The street is crowded with people and then the prams start arriving and the teams head into the pub for a drink. It is clear the teams are not making much effort to be the first to the end of the course and they chat and drink happily. The themes for the prams is very broad – Guy Fawkes, an aircraft, a white Nelson’s Column with the team dressed as pigeons, someone in a prison uniform in a cage, Scooby Doo and my favourite, a tall model of the Empire State Building with King Kong hanging off surrounded by planes.

Wednesday 28th December – Home – It was snowing yesterday as we headed back up the busy M1 and there was a sprinkling here in Yorkshire. Another flurry overnight has left a thin covering and a lot of ice. Greenfinches, Chaffinches, Blue Tits, Blackbirds, Wood Pigeons, Collared Doves and a Stock Dove come down for seed. Later in the afternoon, a Nuthatch visits the fat ball.

Saturday 31st December – Nunney, Somerset – It is raining as I take Jasper and Dill the Dog up the lane. As I approach the entrance to the field a Land Rover with several hounds in it draws up and reverses up to the gate. I decide letting these two off in a field of dogs is probably not a great move, so I head off down beside the Penny Mill and across Nunney Brook. The brook is rushing down, pale brown and noisy. Water pours out of the mill pond above the bridge. I let the dogs off their leads and Dill the Dog immediately slips on the greasy stone slabs and falls flat on her face. She manages to fall up the steps to the field as well. Rooks are calling overhead from a rookery. Jackdaws call from nearby roof tops. A Green Woodpecker yaffles in the distance.

Wells – The city is busy. I cannot understand why cars are not banned from the busy High Street and market square. They make shopping a nightmare. Opposite Henry and Jill’s flat window overlooking the High Street, there are two windows on the top floor of a shop. As they have white glass lettering in leaded panes, I would guess they are 1930s. One states Permanent Waving, the other Electric Massage.