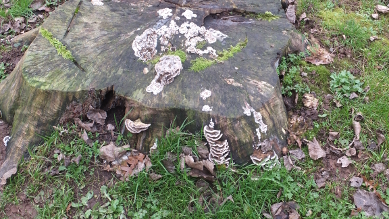 Wednesday 2nd December – Leominster – The rain of the past few days has stopped although this may be only a temporary dry spell. It has been mild but the westerly wind has a chill about it. Down to the bridge over the railway under which a diesel three car passenger train growls as it accelerates away from the station. A Robin sings and Wrens tick by the River Lugg which is even higher than of late, carrying water away from the Welsh hills. Flood warnings have been issued for the River Wye. A stump behind Brightwells has a fine growth of Many-zoned Polypore, Coriolus versicolor a very common bracket fungus. Round the riverside walk where the Kenwater is also flowing fast and muddy. Into town to see what shops have changed this week – they come and go at a surprising rate.

Friday 4th December – Knighton – Fine drizzle falls but soon stops. Grey clouds still threaten rain though. Through the abandoned industrial site and along the track above the River Teme. The river level is high and the grey water flows rapidly with choppy wavelets. There is a small footbridge that ran over a now dried up stream. It has now been marked and signed as the Welsh-English border crosses its middle. Robins flit through the hedges, one seems agitated by a Carrion Crow cawing in the tree above. Over the River by a footbridge beside the railway line and then on up Panpunton Hill. The path is steep and wet, all the soil has been washed away leaving bedrock and piles of leaves blocking like 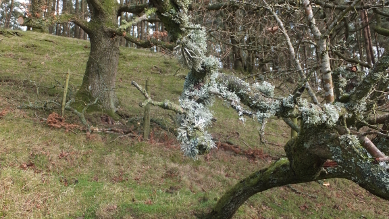 little dams. A Blackbird chucks gently. Corvids glide overhead and a pair of Common Buzzards hang in the wind, mewing, before wheeling away. This is the Offa’s Dyke Path. It leads out onto the open hillside and the grassy track becomes very slippery. Ravens fly over, barking. At the top of the climb the wind is stronger and the air wet. A faint rainbow hangs in the west. A few Crab Apples lie under a gnarled tree. More bent and twisted limbs are garnished with grey-green lichens. 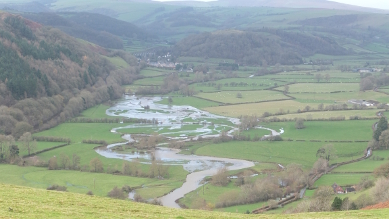 The path runs along along the hillside above the Teme valley. Behind is Knighton, ahead the viaduct over Knuclas and in between, near Skyborry Green the river has burst its banks and flooded the fields, although the map shows a number of watercourses and meanders here so the course of the river has always been variable here and flooding will occur easily. Ravens move slowly and effortlessly overhead. To the south low clouds roll across the Radnor Forest obscuring Black Mixen. Suddenly the valley disappears in a white cloud and the rain arrives. The strengthening wind makes donning my over trousers a nightmare. The sun makes brief appearances causing rainbows to fade in and out again in seconds. Kay mentioned yesterday when we were heading for Hay-on-Wye that the sheep have been washed white and they are indeed very clean and rather blow-dried. A section of the dyke is still visible here by a group of old, dying Larches. A number of the sheep are hobbling along with foot rot. On along the path. A train passes over the viaduct heading for mid Wales. Round the top of a deep cwm. The path is rather treacherous and starts to climb again up as hill.

Finally the top of Cwm-sanaham hill comes into view with a triangulation point. Now the view is all round panoramic, hills rolling away in all directions. Off down the hill again. The dyke is a lumpy mound about three feet high running down the hill. Yellow Parrot Wax Caps Hygrocybe psittacina flourish the closely cropped grass. A flock of over sixty Fieldfares cross the hill, dropping down onto the fields briefly before moving on. The path now narrows and drops steeply down to Brynorgan. Underfoot becomes more and more treacherous as the muddy slope steepens even further, every foot steps barely controlled slide. Gorse branches are dotted with chrome yellow patches of Yellow Brain Fungus Tremella mesenterica. Finally the white cottage of Brynorgan is reached. The track, which is still on the route of the dyke, joins a road where I leave the Offa’s Dyke Path and head for Selley Cross near Selley Hall, a large house in the hands of the Powell family during the 18th and 19th centuries. I am greeted noisily at the crossroads by three collies.

A lane heads for Skyborry Green. The name Skyborry is an anglicisation of the Welsh for barn, ysgubor. Down here out of the wind it is mild. Water runs runs down a ditch by the lane brfore spreading out across the tarmac, every ditch and stream is running high and fast. The lane runs on down towards the Teme valley through neatly trimmed hedgerows. The Hazel in the hedgerow is 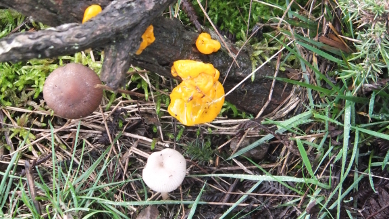 covered in nascent catkins. Across the fields stands a house at the foot of a slight valley set into the hillside, Cwm-sanahan, which I assume gave its name to the hill above. A pair of large Parasol Mushrooms, Lepiota procera, grow on the verge. Skyborry Green is little more than a large farm. Here the minor road that runs down the north side of the valley, leading to Nether Skyborry and on to Panpunton. A well-made wooden gate and an older blacksmithed one guard the old entrance to the fine house of Skyborry. Wellingtonias stand either side of the gates. This drive is clearly not used any more. Great and Blue Tits, Dunnocks and Chaffinches flit between the hedgerows. Nether Skyborry is a fine early to mid 19th century house built around an earlier core. It was for many years the home of the actor, Richard Thorp. Weir Cottage is below the road towards the river. It appears to be a very large house, hardly a cottage! It was the home of Sir John Hunt, his wife Joy and their four daughters. A party was held here on 5th July 1953 when John Hunt returned from Nepal following the first successful climb to the summit of Everest. The driveway emerges some distance down the lane. A small George V post box, marked Letters Only is attached to a telegraph pole. At Panpunton the track crosses back over the railway and river and runs back into Knighton. Route 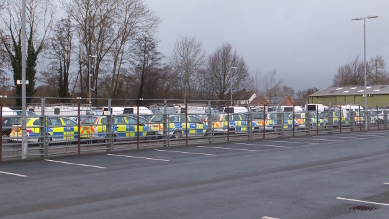 Sunday 6th December – Leominster – Storm Desmond has moved through inflicting flooding on Scotland and Cumbria. Here the winds have been violent but are now backing off. Yesterday, the felt roof of the Flying Dutchman café was laying in the pull-in in Victoria Street. A Great Spotted Woodpecker is on the peanut feeder in the garden. 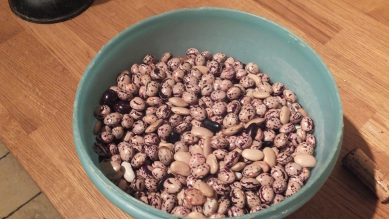 A Blackbird has got itself trapped in the fruit cage, crashing wildly into the meshing. I open the door and leave it to eventually find its way out. Past the White Lion. Wood Pigeons explode out of trees in the pub garden with loud flapping of wings. The river levels seem pretty much the same as they have been for the past couple of weeks. Over to the market. There is still a long row of police cars in the auction compound – more than we see in Leominster in year! The market is small again. I purchase a Christmas wreath for the front door. Cheaton Brook is high and muddy, the pale rust-brown water pouring out into the grey of the River Lugg.

Home – French beans have been drying in the summerhouse and we sit around the table and pod them. We have enough for a good number of meals.

Wednesday 9th December – Bodenham Lake – A brief visit. The sky is still tempestuous with dark grey clouds although the sun makes brief appearances. Severe flooding has occurred around Carlisle and the Lake District and yet again the Government make promises about strengthening flood defences, despite 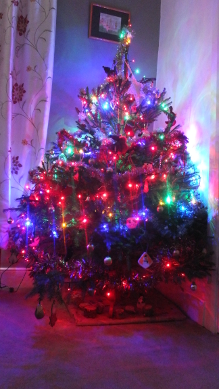 there being many new defences which were topped by this latest storm, whilst continuing to ignore the simple facts that climatic change will make these sort of weather events more frequent and more fundamental changes need to be made, such as reforesting the vast open spaces denuded by sheep and taking measures to slow down the flow of water off these hills and down the rivers. Surprisingly, none of the usual fields south of the town have been flooded. A couple of Mute Swans and a flock of Lesser Black-backed Gulls stands on green grass rather than float over the meadows. At Bodenham, a Grey heron flies across the lake with a prehistoric bark. Wigeon, Coot and Mallard are at the east end. Teal are sheltering on the bank. We do not venture down to the hide but from the bay a large flock of Canada Geese can be seen around the scrape. The trees in the cider orchard are bare. In the dessert apple orchard most fruit has gone now but a few apples remain including a deep red variety with a red blush to the flesh which is still crisp and juicy.

We pop into Wyevale garden centre. A Robin stands on a post under the outside awning singing very loudly. Inside the main building another Robin is singing but I cannot locate him. House Sparrows feed on spilt seed in one aisle, retreating to the roof when customers approach. Our next stop is the Dinmore Christmas tree farm. We usually buy a live tree and try to keep it going for a couple of years but they seem rather expensive this year and only Nordmanns are available and we prefer the old fashioned Spruces, so we settle for one of those as a cut tree. Kay works her magic and soon we have a glorious, traditional manifestation of Christmas!

Friday 11th December – Wenlock Edge – Grey Squirrels scatter as I enter Harton Hollow. The sky is also grey with clouds on the horizon. Off in a north-easterly direction along Wenlock Edge. To the east, across Hope Dale, Brown Clee rises topped with communication masts. Jackdaws chatter across the Dale. An old sign warns of the danger posed by quarries close to the path. A raptor calls, I have seen both Red Kites and Common Buzzards on the way here. A Ring-necked Pheasant croaks in the adjoining field. The path is coated in muddy leaf mould. A pair of pheasants explod