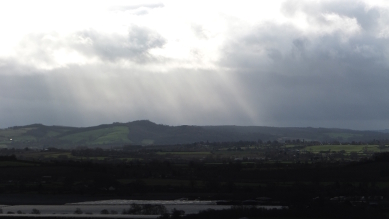 Monday 1st February – Queenswood Country Park – The sky is grey although glows to the south where the sun lights up the clouds. There is a brisk, blustery wind. A Robins sing from the still skeletal, bare trees. Chaffinches search the branches for grubs. They move steadily and deliberately along the branches unlike the restless tits. A Flowering Crab Apple has been infected by Mistletoe. Quite a few Acers and Magnolias have nascent leaf buds. Through the pines of Cotterells Folly. A Great Spotted Woodpecker chips. At the top of the southern slope a large number of Ash trees, maybe in the twenty to thirty years old range, have been cleared. The trunks have been piled up which I assume would not be allowed if Ash-die-back disease was the reason for their removal. From the look-out the distant hills are clear and sharp. Rays of sun beam down through the clouds. There is some water still lying on the fields but what looks like a large area of flooding is in fact polytunnels. On round the paths. The wooden carved statues of animals are weathering well. Blue Tits are active and vocal. More Robins sing. A Common Buzzard alights on a tree beside the busy A49. A pair of Cherry Kursar trees are in flower; their pink blossom is always the earliest in the arboretum. A Raven with missing secondary wing feathers flies over, calling quietly.

Friday 5th February – Ludlow – Another grey morning with a cool breeze. Out of Ludlow station and up to Gravel Hill. The street contains Victorian and Edwardian housing, some detached, semis and small terraces. The church of of St John the Evangelist, built in 1881 by Sir AW Blomfield at a cost of £5,000, from funds provided by Mary Windsor Clive, of Oakley Park, is locked. An Agnes Dei is carved over the entrance. The house overlooking the church has a fine three panelled window of stained glass. At the top of the hill is a Georgian house built onto an older building. Opposite is the Community Hospital. Part of the buildings were the old workhouse built circa 1833. It is sometimes called the East Hamlet hospital; this dates from when Ludlow had another hospital, on College Street. Gravel Hill joins a junction of New Road and Henley Road.

Opposite is the Roman Catholic church of St Peter. It is a square building of curves. The style apparently is neo-Byzantine and plain Romanesque. It was built in the early 1930s, the architect being Signor Dr Giuseppe Rinvolucri of Conway. He designed the church at Amlwch in Anglesea that we passed last year but did not stop at, unfortunately. Oddly the gates have an inverted cross in them. The parish centre behind the church is Art Deco with a curved frontage echoing the church.

On up Henley Road. The housing is mainly inter-wars, some with a nod to Art Deco. Ahead, Titterstone Clee looms darkly in the distance. A ginnel leads off into a post war housing estate. Goldfinches sing in the trees. One house has an old Mitchells and Butler pub lamp outside. Through the streets and past St Julian’s Well. The well was originally within the 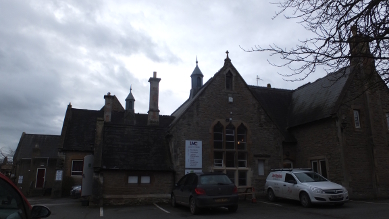 precincts of the Augustinian friary, which was established in the mid-13th century and is located to the east of the medieval town. St Julian’s Well was used as a source of water for the White Conduit, which is thought to have served as the town’s first public water supply. There are documentary references to the White Conduit during the reign of Edward IV (1461-83), and this is probably the water supply mentioned in a document of 1308. The street is more inter-war housing. A footpath runs down the hill. Blackthorn is coming into flower. The path runs behind the gardens of the properties in St Julian’s Road before emerging into Gravel Hill. Into St Stephen’s Close. St Stephen’s church, erected in 1880, at a cost of £1200, is now a motor parts dealer. A passageway leads to Lower Galdiford. The street is a mixture of small houses dating from 17th century to late 20th. The Bishop Mascall Centre opened as a National school in 1857. A device of the Prince of Wales feathers is carved on a wall and a coat of arms on another. Lead vents adorn the roof. Another ginnel, Friar’s Walk, runs down the hill. It has a high old stone wall down its length, reportedly the old town wall. It ends in Old Street just below where the town gate stood. Down Old Street to Temeside, which as the name suggests lies beside the River Teme. Past the large Horseshoe weir. Over Ludford Bridge.

The village of Ludford probably grew up on the other side of the river from its present position on the south side of the bridge. The bridge was recorded in connection with St John’s a Hospital which stood at the bottom of what became Broad Street. Ludlow was a later development. The Church of St Giles is thought to have been built on the 12th 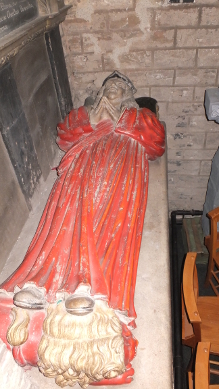 century, there is a Norman window in the tower. However, little is known about it. It was part of the chaplaincy of the Priory of Bromfield until its dissolution in 1538. The nave and chancel are Norman. The Royal Arms hangs on the nave wall. It has the arms of Hanover in the centre and dates from 1808-1815. To the north is the Fox Chapel built around 1555. In this chapel are some fine brasses of William Fox, his wife and children. An altar shaped monument is for Edward Fox who died in 1610 and a tomb-chest with a recumbent effigy of Sir Job Charlton. Sir Job was Chief Justice of Chester but was removed to make way for Judge Jeffreys, the notorious hanging judge. Job was forced out of the judiciary for opposing James II’s use of power to dispense laws. The figure on the tomb is painted red to signify his judge’s robes. A leper house dedicated to St Giles was built next to the church in the early 13th century later becoming an almshouse. At dissolution the possessions of St John’s Hospital was obtained by William Foxe, a rising lawyer and later MP for Ludlow. He demolished the leper hospital and built a mansion on the site. His grandson mortgaged the estates and after his death, the manor of Ludford was sold to Robert Charlton. The Charltons held the estate until 1920. The Old Bell House is a partly timber-framed merchants house built around 1600. Behind it is Ludford Mill whose gardens were probably first laid around 1911 by the Arts & Craft’s architect Basil Stallybrass who was doing extensive work on Old Bell House at that time. At the end of the lane is the cemetery and Ludford Park. Over the road to the Charlton Arms for a pint. 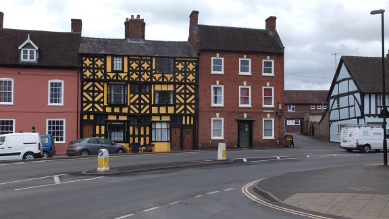 Up onto Whitcliffe Common and down to the river. Robins sing, Nuthatches, Jackdaws and Mistle Thrushes call. Along the riverside walk. Beside the path are tall cliffs created by the deposition over millions of years of Silurian limestone. Over Dinham Bridge and past Dinham Mill, also called Castle Mill. This 14th century mill was probably the last to be established along this stretch of the Teme despite the Dinham area possibly being the oldest part of Ludlow. A path runs around underneath the steep outcrop on which the castle stands. Up into the town and through the market to the Church pub. After a couple of pints I head down Corve Street, a wonderful mix of building styles ranging over several centuries. Stone House, a mid 19th century façade on an 18th century core, now housing the South Shropshire district Council offices, stands next to a 16th century timber-framed building next to the 18th century Maltster’s House. A little further on is a little cottage in stone then another timber-framed house then a Georgian townhouse, followed by a lovely timber-framed house in yellow and black. Corve bridge is modern concrete, replacing the old bridge which was swept away. The weather is deteriorating, angry clouds move over and there is rain in the air. As the train approaches Leominster the conductor announces, This station is called Leominster and that’s because it’s in the town of Leominster. I comment with a grin as I leave the train, I get bored, he replies.

Shrove Tuesday 9th February – Leominster – A walk takes me down Burgess Street which has a number of buildings, none of which are being used for their original purpose. Most dominant is the Congregational or Independent Chapel, now occupied by J Mart stores. The church was built in 1866 by James Page at a cost of £1600. It replaced a Presbyterian chapel built in 1719. They became Llewellyns, a sect that had no connection with any other. Opposite is the Wesleyan Methodist Chapel now an arcade of shops and an Indian restaurant. This chapel was built in the 1860s to replace a chapel further up Burgess Street. It cost £985 and seated 300. In 1939 it was decided to only hold fortnightly services for the duration of the war. Soon after, the schoolroom in Burgess Street was requisitioned by the Army. The secretary of the chapel was asked to disconnect the electricity supply 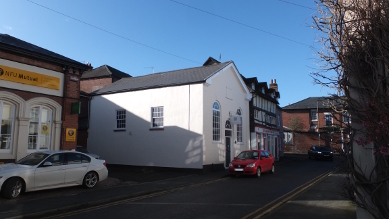 to the schoolroom and to block up the access between the chapel and the schoolroom and by January 1940 the majority of services were being held at the Primitive Methodist Chapel on Green Lane. In 1944 part of the building was still being used by the Army and consideration was given to turning it into a British Restaurant, but it was decided that it was unsuitable. There was discussion about building a new Methodist Chapel but the funds were not available. In 1945 the pews and organ were put up for sale and the pulpit bible and hymn books were distributed to the surrounding country chapels. The building was sold in 1945 for £2,400.

On up the street from the Congregational Church is Grafton House, a 14th century hall with later alterations. Along the upper windows sills is inscribed This is Grafton House. In the mid-Victorian period it housed the Leominster Liberal Association. Until recently it housed the Women’s Institute Friday market, but that has sadly gone. Next the old Magistrates’ Court, closed in 2002. The old Police Station was built in 1885 on the site of the 13<sup class="