Monday 1st February – Stoke Prior – Today is Imbolc, a pagan festival associated with the goddess Brigid, that was Christianised as a festival of Saint Brigid. The air is damp and cold under grey skies but the temperature is above freezing. Various birds twitter and tweet down the street. Along Worcester Road. Up onto the old road bridge over the railway. Below, one bush records last year with the white Old Man’s Beard, a wild Clematis, whilst another is yellow with this year’s pussy willow. A clank is heard from the signal box as a signal is changed somewhere. Jackdaws fly from the roof of the industrial units to the woodland that runs alongside the railway. Wood Pigeons sit silently in these trees. Along the old section of the A44. A Song Thrush is singing in the bushes. Blue Tits dash hither and thither. A Wren ticks from the undergrowth. A pair of Dunnocks slip unobtrusively into an Ivy ticket.

On to Eaton Bridge. The water level of the River Lugg is high, swirling and eddying as it heads southwards. Riverside trees have their roots submerged. The horse paddocks are flooded with large pools. I stare for a while at multi-brown coloured “duck” before realising is actually a large lump of horse droppings.

Into Stoke Prior Road. Robins and Song Thrushes are singing along the road. A Blackbird is on the wires and House Sparrows in the hedgerows. A cockerel crows at Eaton Barns. The small orchard planted a few years back at Eaton Hall is now a sizeable pond. All along the verge there are new scrapings and burrows – rabbits I assume. A Common 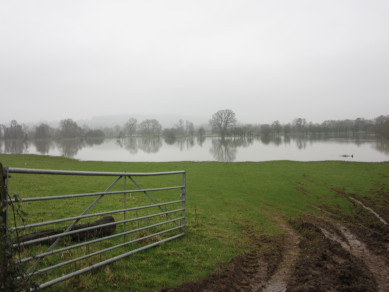 Buzzard is on the field sloping up to the east. It is searching for worms which makeup up a sizeable amount of its diet at this time of year. Large sheets of water laying the fields but it appears just a single pair of Mallard are taking advantage of them.

Past Wheelbarrow Castle, a name for which I have yet to find an explanation. A Great Spotted Woodpecker drums in an avenue of trees. Half a dozen Redwings fly off. Ditches and channels have been dug out beside Castle Cottage taking away the water that is pouring off the hillside.

Into the village of Stoke Prior. The new development on the edge of the village is still under construction after what seems to be quite a number of years. Those houses close to completion are large and certainly not what one might consider to be affordable. Apart from the ceramic West Country badge by the door, there is nothing that shows a large house was The Lamb pub. It is sad, it was one of the first long walks that I took Maddy and we stopped here. She barked madly when I went in to get a pint, leaving her outside, but she soon learned that pubs mean snacks as she polished off a bag of scratchings. Through the village and up the lane that leads up to the Steen Bridge junction.

Snowdrops are reflected in the large pond at Wall End Farm. A Moorhen wanders across the grass searching for food. On up the hill. The first Primroses are about to bloom on a roadside bank. The primary school is quiet but the presence of cars outside indicate teaching staff must be in with some children.

Up to to the road junction. A Common Buzzard is standing on top of a large pile of soil on the edge of a field. A flock of over 50 Fieldfares and Redwings search the field for grubs. Along the lane towards the A44. A pair of cock Ring-neck Pheasants run across a rough pasture like clockwork toys. Past The Drum, a large house which has been nicely redecorated. A Goldfinch flies up to a thistle in a field of sprouting oilseed rape.

Across the A44 and into the Stretford Bury lane. Down the hill. The horsebox which has stood outside one of the houses ever since I first came down this road has finally disappeared. Down to Stretford Brook and Stretford Bury. The brook is orange-brown with mud. Road rises to the Pudlestone crossroads then descends again to Holly Brook. A few Rooks are calling from the rookery on the junction. Up the hill again to Colaba Lodge. Massive English 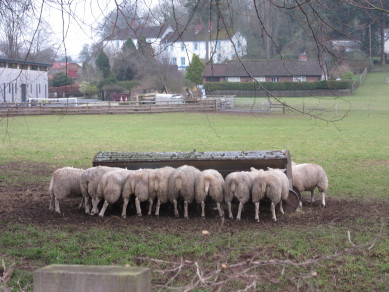 Longhorn cattle with white stripes down their backs are feeding in the field. One of a pair of Ravens at the top of a conifer by the entrance to Colaba Lodge is making a strange gulping noise.

Past Patty’s Cross and the Hamnish junction. The fields are completely empty of life. A pair of Long-tailed Tits flit along the hedgerow. A Song Thrush sings from the top of the tree at Widgeon Hill. A Mistle Thrush rasps from nearby. A Common Buzzard stands on the fence post by a paddock. On down to Docklow Slade. A footpath crosses the fields to the path to Hay Lane. The path crosses Whittey Brook just before it joins Cheaton Brook. The next field runs alongside a meandering Cheaton Brook. Across another field to the bridge over Cogwell Brook. Hay Lane Farm has been painted and is shining white in the landscape with pale blue window frames.

On to the A49. On the other side of Cheaton Brook a line of sheep show their bottoms to the world as they stick their heads into the feeder. At Easters Court a lighting firm now has a showroom and factory shop.

Tuesday 2nd February – Home – Today is Candlemas, also known as the Feast of the Presentation of Jesus Christ, the Feast of the Purification of the Blessed Virgin Mary, and the Feast of the Holy Encounter; one of the oldest feast days. Rain has fallen throughout the night. In many parts of the country, it has been snowing. By dawn the rain has stopped. The resident Song Thrush is singing loudly. Jackdaws are fussing around the spaces in the chimney of the cottage down the road. A little later in the morning, fourteen Jackdaws gather in the Ash tree. In the early afternoon, two Jackdaws are still on the chimney, peering into the space in the bricks like any prospective home purchasers. Later in the afternoon the sky darkens and the rain returns, pounding on the roof.

Friday 5th February – Leominster – A bright sunny morning with scattered cloud but everywhere is still saturated. There is a light breeze which nips at the fingers and cheeks. Over the railway and onto Butts Bridge. The River Lugg remains at a moderately high level. A Robin and a Wren both sing. Back around to the Millennium Park. Several Robins are in song here also and another Wren ticks from the track-side hedge. Snowdrops, The Maids of February, along the edge of the churchyard are at their best now. The Minster bells toll the hour. Sky is clouding over rapidly.

Into the Peace Garden. A Song Thrush sings from a tree beside the river Kenwater, which is flowing rapidly although the water level has fallen slightly. A lone Goosander flies over the churchyard towards the river. More Robins are singing the trees and a Dunnock skulks in a bush.

Into a quiet town. There are few people at the market. By early afternoon it is raining.

Sunday 7th February – Leominster – The sky contains plenty of grey clouds and a strong, cold, easterly the wind blows up the street. Jackdaws searched pavements and road for morsels. One bounces up and down on the spot uncertain whether to take flight or not. Onto Butts Bridge; the water level in the River Lugg has fallen again. The water is green-grey. A distant Great Spotted Woodpecker drums on a branch that resonates well. Wood Pigeons fly out of bankside trees.

Back over the railway. A bus stands at the station, the line is probably closed again. Several flocks of Jackdaws join up the form a single flock of over fifty birds. It looks like they are exalting in the wind, flying just for the joy of it. Other birds are keeping their heads down, I have yet to hear a single song. Then just to prove me wrong a Dunnock starts singing on the far side of the railway.

Through the Millennium Park. The River Kenwater is flowing rapidly. Into a Snowdrop strewn churchyard. The sun emerges from behind the clouds and the white petals glow brightly. A new information board has been erected on the Grange giving its history and showing pictures of its use as a cricket pitch and the gathering of crowds to celebrate Queen Victoria’s Diamond Jubilee in 1897. Other pictures show the now demolished Grange House Academy, a school on the edge of the Grange. The school was established in the 1790s and moved to what is now The Rankin Club in Corn Square in the 1880s. In 1896, the News advertised that the pupils of Grange College would move to Dutton House on Etnam Street, whilst a small girls’ school remained in Corn Square. By 1912 the girls had gone, but there was a boys’ school in Dutton House until the 1960s.

Monday 8th February – Home – A few small flakes of snow fall. Across the country, Storm Darcy has moved in from the east dumping a lot of snow in some places. The birds’ water is frozen so a kettle of hot water thaws it a bit. The chickens’ water is simply changed. An elastic band around wires attached to the lid of the seed feeder was supposed to stop the Grey Squirrels flipping it open and helping themselves to the seed – it has not worked! House Sparrows wait in the shrubbery for the feeders to be refilled. A Greenfinch calls his nasal song, something that is not so common these days.

Leominster – A few flakes of snow are still falling as I head off down the road. It is raw with a north Thus Nature of the Spring will dream
While south winds thaw; but soon again
Frost breathes upon the stiff’ning stream,
And numbs it into ice: the plain
Soon wears its mourning garb of white;
And icicles, that fret at noon,
Will eke their icy tails at night
Beneath the chilly stars and moon.

easterly wind increasing the chill factor. Into Caswell Crescent. Pairs of Jackdaws are searching the grass verges for food. One pair fly off and one of them reveals white secondary feathers. Round in to Worcester Road. Gulls drift over their wings barely moving as they ride the wind. A takeaway food wagon is parked in a lot but I suspect customers will be few and far between.

Into the Enterprise Park. A Robin sings. A Carrion Crow and a couple of Magpies are on the wall of a settling tank in the water treatment plant. Opposite is a company working in metal panels and structures. An artic lorry from Liverpool is unloading rolls of sheet metal. Goldcrests flit around the trees beside the drainage ditch that runs between the Enterprise Park and the fields to the east. The patch of ground opposite police station is silent, nothing moving. A large lorry from Lincoln passes carrying brand new farm equipment. To the east, the Manchester bound train slows for the station.

A quick scan of the distant flooded fields next to the A49 reveals nothing. On to the Hereford Road and down to Broadward Bridge. The River Arrow is running high again and there is extensive flooding on both sides of the road. A sizeable flock of Redwings and Fieldfares are feeding on the saturated field. A brief appearance