Tuesday 1st July – Fleets Dam – It has been raining continuously for over twenty four hours and shows little sign of ceasing. The difference this has made is noticeable, to say the least! A couple of days ago the River Dearne ran over the weir just through the centre step; today there is a torrent covering the full extent of the weir. Water crashes onto the rubble below and boils round in eddies. Water spouts out of the culverts on each side of the concrete channel down which the river rushes. Bushes and plants lining the path lean over, heavy with rain drops and large drops plop onto me from the overhead trees. Much of the build up of debris and rubbish in the river, held up by broken branches, has been washed away. There are a few determined men fishing on the Fleets, huddles under their umbrellas. A tern flies around at the far end. Dill the Dog has quickly remembered the wet weather routine and waits in the hall when we return to be towelled down.

Saturday 5th July – Blackburn Meadows – A bright yet overcast morning. A Mute Swan sleeps on the edge of one of the ponds. Nearby a duck Mallard and her brood also rest on the shingle. A Little Ringed Plover darts by. A Lapwing calls from the mud. On the water are a Coot and single chick, Black-headed Gulls and a Dabchick. Large areas of Lucerne are in blossom. Other summer flowers are emerging, Lady’s Bedstraw, Great Willowherb, Meadow Cranesbill, Field Scabious, Common Mallow and Teasel. A Sedge Warbler is still very vocal. Dill the Dog manages to fail to see any of the rabbits that scuttle off the path and into the long grass. By the canal lock gates a pair of Mink are chattering away. They seems completely fearless and run along the other side of the lock ignoring us completely. Yet again, our eagle-eyed dog only sees them after she has got into the car.

Saturday 12th July – Dodworth – The clay track is bone dry and hard. The sun beats down – it is going to be a hot one! Ragwort and various umbellifers are in flower and providing meals for numerous butterflies – Meadow Browns, Small Skipper, Small Tortoiseshell, Small Heath, Gatekeeper and a Comma. The delicate pink flowers of Common Centaury peep through the coarse grasses.

Home – The garlic crop is lifted and is the best yet. The ground is raked over and within hours more lettuce and radishes have been sown. The Broad Bean and Mange Tout pea crops are also prolific. Unfortunately these mange touts (Ezethas Krombek Blauwschok), whilst having pretty pink and purple flowers and deep mauve pods, turn stringy very quickly. So the majority are being left to fill out as normal peas. The peas inside are green, not purple as I expected. All the beans are progressing well, scarlet flowers on the Runners and the French beans just beginning to flower. The first potatoes were dug in the week, just enough to provide a meal, and absolutely delicious they were too! Tomatoes and courgettes are both looking rather small and weedy, but there is plenty of time for them to come on.

Monday 13th July – Dumfries – The County Town of the Dumfries and Galloway Region of Scotland, the area in the south-west corner of the country. The town retains much of its old structure although many modern shops and precincts are now in place. The River Nith runs through its centre, wide and slow. A modern steel suspension footbridge has replaced an older one and a beautiful 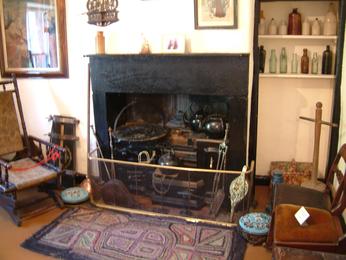 old bridge in red stone is a little way upstream. The Bridge House is now a museum. 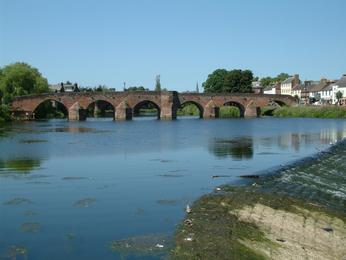 The building is the oldest in Dumfries. It was built in 1660 by James Birkmyre, a barrel maker. Robert Burns, Scotland’s national poet, would have visited the building regularly as part of his duties as an Excise Officer. Many of the exhibits are donations, the oldest being a chair made in 1545. A magnificent fireplace from the 1700s comes from Elschieschiels, stronghold of the Johnson clan. Another room contains an early dental surgery, not an exhibit for the squeamish like me! There is a 1900 kitchen with a picture of Nanny Black, the last occupant who left the house in 1959. From the river front Friars Vennel (Latin Vennella – a wynd or small street and the friars were a community of minorite or Grey Friars, founded in 1263, at the top of the street) runs up the hill. The street runs up to Irish Street where the Irish Port once stood. The area was apple and plum orchards running down to a ford across the river. At the top of the hill the church is built of the same red sandstone, even the spire. Several squares, now part of the shopping precinct lay along the road parallel to the river.

Dunscore – We are lodging in an hotel in the village of Dunscore, north-west of Dumfries. On the way we pass a dead tree with a Common Buzzard sitting in the bare and bleached branches. The village lies in a fold in a series of gentle hills. A true village with a church, Post Office and pub. A quick look at the notices in the Post Office is evidence of a thriving community. Dill the Dog and I brave the blazing afternoon sun and wander up past the church, sit a while outside the graveyard to the non-stop baaing of sheep and then take a short stroll up the country lane. Large bushes of Broom are loaded with green pea-like pods which will soon blacken and then explode in the sun shooting their seed a fair distance. Blackberry brambles are in flower. Yellow Birdsfoot Trefoil and purple Tufted Vetch are common on the rough grasses. There are round outcrops of stone in the fields. There are at least four House Martin nests outside our bedroom window.

Tuesday 14th July – Castle Douglas – A splendid small town on the road to Stranraer. The main street is full of the type of shops remembered from years gone past; real butchers, grocers, greengrocers, wool shop, iron-mongers; shops that sell what you want, rather than chain stores and supermarkets which sell you what they want. We get some provisions for lunch in a wholefood shop. The temperature is steadily rising.

Threave House and Gardens – A National Trust property consisting of some wonderful ornamental gardens and a real old walled garden. The flowers are beautiful, but my real interest is in the neat rows of vegetables. All are both healthy looking and large (compared with my efforts at home!)

Threave Castle – I visited the castle in the early 60s so it is a dim childhood memory. Access is still by a small boat 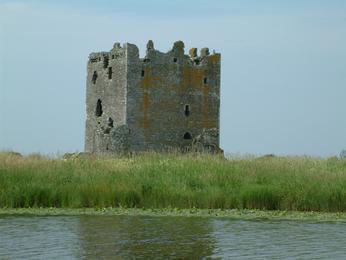 that plies the brief stretch of water to the island on which the castle is built. Here is the main difference to my childhood memory – the boat has an outboard motor, whereas before it was sculled by oars. Although no evidence has been found of Dark Age occupation of the site the name Threave was formally Trief which is derived from the Old Welsh Tref meaning a homestead. Old Welsh was replaced as the native tongue of Galloway during the 7th century when Gaelic speaking peoples arrived in the area. There was a building here before the present castle. A silver penny of Edward I of England has been found in the remains of a burnt out building. This would date the building to 1300 at the least. The tall tower that dominates the island was built shortly after 1369, when Archibald the Grim became Lord of Galloway. Fifty years after Archibald Douglas’ death in the 1400, King James II was determined to overthrow the Black Douglases. James started a systematic destruction of Douglas strongholds. In 1447, artillery 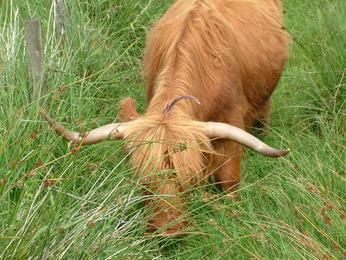 fortifications were added to the tower. These were very sophisticated for the time and were probably the work of John Dunbar, a squire of Black Douglas, who was a frequent visitor to the Low Countries, which at that time was the centre of the armaments industry. However, after a two month siege in 1455, the garrison surrendered, probably through bribery rather than force, and the Black Douglases were finally finished. An enduring memory for me from the 1960s visit was one of the artillery tower’s floor being covered by tiny frogs. The ferryman told me this bloom of what he believes to be toads still occurs but not every year, and unfortunately not this year. In fields beside the path to the castle are various breeds of cattle including Highlands with their red hair and long curved horns, Galloway belties – black cattle with a white stripe around their middle and a beautiful small breed of curly haired cows.

Kirkcudbright – The Royal Burgh of Kirkcudbright stands on the River Dee shortly before its waters meet the Solway Firth. What looks like a substantial dock now only has two boats tied up, one being the Solway Provider. Scallop shell fragments crunch underfoot. The main street is dominated at one end by MacLellan’s Castle. Built in the second half of the 16th century, its design signifies a major change in tower building at that time. Although there are some features of a defensive nature, they are half-hearted and the castle is more like a major town house, whilst retaining the shape of a tower. The site was that of the convent of Greyfriars, established by James II in 1449. The castle was intended to be a monument to Sir Thomas MacLennan’s cosmopolitan good taste, but in fact was probably never fully fitted out internally. By 1742, the roof had been stripped and the place abandoned. Otherwise, Kirkcudbright seemed an unremarkable town.

Gatehouse of Fleet – In the intense afternoon heat we seek a shady spot for a rest. The River Fleet drifts by, boys fish, birds still call and flit around despite a temperature in the mid 30s Centigrade. An old mill has been converted into a café and craft studios.

Wednesday 15th July – Through the hills towards Moniaive and down to St Johns Town of Dalry. The hills are a mixture of forest and moorland. A magnificent Gold-ringed Dragonfly sits motionless on a Foxglove. A Wheatear bobs along beside the road, its white rump flashing. 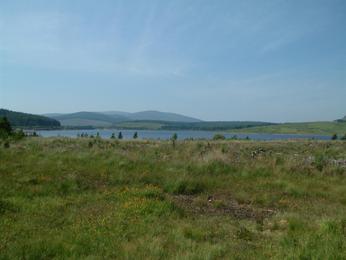 Bruce’s Stone – Robert the Bruce is said to have rested here after beating English with the help of Sir James Douglas, the Black Douglas, in 1307. The stone is beside a wide blue loch. It is hardly surprising that the Bruce, or anyone else would choose to rest in such a peaceful location. Greylag Geese bob on the waters. Bog Asphodel, a bright yellow member of the lily fam