Tuesday 2nd March – Dearne Valley Park – Along from Old Mill. The canal is deeply frozen. Snow lying on the ice has partially melted and then refrozen. There are footprints in the ice; only one is clear enough to identify as Grey Heron, others look like an animal but are too melted and refrozen to tell. Hoyle Mill crowds around the Pontefract Road. The road is all that is left – the pit has gone, the canal gone and the railways gone. Song Thrushes and Blackbirds hop on the grass seeking worms. More Song Thrushes are singing around the fishing lake. It is good to see decent numbers of this species that has suffered considerable losses over the last half century. The River Dearne is still very low, melt water must have been spread out over the past week so as to create a steady amount of flow rather than a flood. A Grey Heron stands in the middle of the frozen lake; these must been lean days for it. A Willow Tit scurries through the tree branches.

Thursday 4th March – Silkstone Fall – The woods are damp and dark under a grey sky, but this does not stop the battle of songs between several Great Tits. Their cyclic calls ring out. Goldcrests, tiny, mice-like search conifers for invertebrates. A Wren alarm calls like automatic gun-fire from deep in the plantation. I head over towards Silverwood Scout Camp, down a fir needle covered path. An area of mounds beside the path indicates old mining sites. A path runs alongside the camp. Jays screech above. The path dips down to a stream running through a muddy bottom down towards Bank Hall Farm. Wild Garlic leaves, also called Ransoms emerge from the mud. Bluebells leaves shoot up through the leaf litter. A Chaffinch sings. I turn back through the camp. A twitten bounded by a russet leaved Beech hedge leads to a little open air chapel. The pews are rows of breeze block with a square altar and a simple wooden cross. 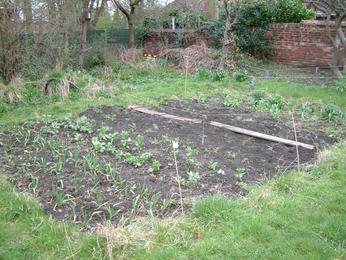 Sunday 7th March – Home – It is raining again. I was hoping for a dry weekend to give the soil in the garden a chance; it is sodden at the moment. Several areas in the vegetable patch need digging. At least I managed to thin out the autumn sown Spinach which has responded well. A Blackbird perches on an apple tree twig and reaches down to peck at the fat ball hanging below. Dunnocks chase through the shrubbery. In the large Holly out front, a Collared Dove is nesting. She is persistent, her nest was destroyed twice by the skip we had to remove rubble when the bathroom was done out.

Tuesday 9th March – Netherwood Country Park – Skirting around the massive hill of colliery waste now covered with conifers and Silver Birch, and onto a black and muddy path. A flock of Canada Geese are flying around noisily. Otherwise only a Great Tit and Wren disturb the gentle sound of the River Dove. Towards a wooden footbridge a mud-covered Dill the Dog is miraculously white again – she has been in the river. She will later pay for this charging around as her back legs stiffen during the afternoon and evening. Yellow flowers of Coltsfoot emerge through the still dead grass. Their leaves, which are used in herbal tobacco mixes and cough medicine, will only appear when the flowers die off. There is a mixed flock of geese in a field, twenty six Greylags, two Canada and on each of Pink-foot and strange Greater White-fronted Goose which has a broad white band across its chest. There is rain in the air.

Sunday 14th March – Edderthorpe Flash – It has been quite a while since I last visited the flash. A large flock of Golden Plover are swirling around above fields near Darfield. It is raining slightly and grey, but warmer than of late. The level of water in the flash is high with the muddy areas reduced to a thin strip. There is a large number of wildfowl at the southern end – Mallard, Shoveler, Pochard, Tufted Duck and Wigeon. Just two Canada Geese stand on the bank. Dill the Dog greatly dislikes the old railway ballast that forms the track and walks across it gingerly.

Monday 15th March – Willowbank – It is now noticeably warmer with bright sunshine. Robins, Chaffinches, Wrens, Blue and Great Tit songs and calls fill the air. A pair of Lapwing flicker over the fields beyond the River Dearne. The blood-curdling screech of a Little Grebe rises from the valley below.

Tuesday 16th March – Home – The weather grows ever warmer. There is a large glob of frog’s spawn in the pond. The water churns with frogs whenever approach the ponds. A Robin is singing loudly. Another row of peas has been sown. The over-wintering row has suffered from predation by pigeons despite the row of compact discs flashing in the sun.

Thursday 18th March – Scout Dike – A gaggle of yelping Canada Geese flies off the Pennine fields and onto the reservoir. A few pairs of Mallard and some squabbling Coot are on the water. Blue Tits, Wrens and good numbers of Chaffinch call from the stand of conifers. It is disturbing to note that even more of the trees look dead than in previous years. On the north side of the reservoir, Tufted Duck sleep under overhanging bushes. A Great Crested Grebe in breeding plumage drifts along the side of the reservoir. A Dabchick bobs up and then utters its unearthly call. A chilling wind blows through pines. Lapwings display over the stone wall edged fields. Over the stream lined with gnarly rooted trees whose trunks belly out over the water. There is a little old arched footbridge with large worn sandstone slabs leading to the pumping station. Sadly all the windows have been boarded, doubtless due to the mindless vandalism that is so prevalent now. Overhead, Rooks caw and tumble in the wind.

Saturday 20th March – Willowbank – Classic March weather; rain and storm force winds. However, it does not stop the bird song. One of the first heard is a Chiffchaff, newly arrived from North Africa. A sound like a pair of pebbles being knocked together means another summer visitor is present – Blackcap. Eventually I locate the dapper little grey bird with his sooty black cap searching for insects in the great Hawthorn scrub area. A Bullfinch, his beautiful rose pink breast a dash of colour against the grey-brown background, is working his way through the Hawthorn buds. A Great Tit seems to have learned only half his song, but persists.

Sunday 21st March – Road to Holmfirth – Officially the first day of Spring and the rain lashes the car. It is another typical March day, sunshine and heavy showers. The wind, which has blasted the country and caused a number of fatalities, is still strong. The local councils must need to use up their highway budgets before the end of the month and financial year because there are roads closed, traffic lights and cones everywhere. We end up taking a detour around the hills as the road into New Mill is closed. In Holmfirth, the heavens open as we walk down to the farmers’ market. We buy locally cured bacon, home made meat and tattie pie, smoked ham from a Lancashire smokehouse near Liverpool, organic milk from a farm near Dewsbury and organic vegetables from growers at Ackworth, near Pontefract. Back home, more seeds are sown in trays. One pool in the garden has at least six globules of spawn.

Monday 22nd March – The Fleets – The north-westerly wind is still cold and the air is damp. The river has responded to the recent rain and flows at a higher level than of late. All the accumulated rubbish has been swept away. The high winds over the weekend seem to have only broken one smallish Elder tree. Yellow Celandines are about to flower.

Tuesday 23rd March – Barnsley Canal – Down Greenfoot Lane to the railway. A row of Hazels outside the school are budding. Along an old path and over the railway. The nice old white fence and gate has been replaced by a metal nastiness. On top of the hill overlooking the valley of the River Dearne there are scattered Hawthorns. Many have had bark stripped by horses, their teeth marks clear in the reddish under wood. Blackthorn is shyly coming into flower – just a bit here and there. At the bottom of the hill there is a pond that seems to have become better established over recent years. It is surrounded by trees and dead trunks point skywards from the water. A pair of Mallard slips into the darkness at the far end. Blue and Willow Tits are calling. Further northwards and the stench of Hydrogen Sulphide comes from a pump in the fields below the canal. A Green Woodpecker calls across the valley. The Water Fern has turned ochre red. A Moorhen skulks under the dipping branches of a large Willow. A Hawthorn has been blown down across the towpath, but is too hefty for me to move. A Chiffchaff is singing on a small Silver Birch. He falls silent as a Kestrel floats over the Hawthorn hedge, then turns and dives down onto the pasture below. A Bumble Bee seems to searching the broken stump of an Elder for a nesting place.

Sunday 28th March – Old Waggon Road – A very pleasant Spring morning even though it is quite overcast. Chaffinches are chasing each other around the Hawthorn hedge beside the track. The world is getting greener by the day. The Hawthorn leaves are emerging, spring wheat shoots are about six inches high now. The cottages at Barnby Furnace are interesting. There is a substantial house, probably mid 19th Century, off of the back long side is a lower cottage and then adjoining this, indeed built into the end of the cottage is another, larger dwelling. The lower section of the latter is built of the local light yellow stone but the upper part is half stone coloured brick and half dark red brick. The chimneys indicate a late Victorian build. The dullness of the day makes the brilliant sunshine yellow of a male Yellowhammer even brighter.