Saturday 3rd May – Harborough Hills – The recent series of high pressure areas that have dominated our weather have been replaced by a chain of lows rushing up from the Western Approaches. Thus, the near drought conditions which have led to many devastating fires across our moorlands in many parts of the country, seem a distant memory as rain pounds down. This morning, however, it is bright and the blue sky looks like a tartan with dozens of jet vapour trails crisscrossing it. Patches of Bluebells sparkle in the nascent bright green grass. A Blackcap sings in the trees above the canal. A Whitethroat is also in song from the top of a Hawthorn bush. A Lilac tree is heavy with blossom. A Carrion Crow croaks harshly. A Kestrel sweeps up the valley over Hoyle Mill and hovers above the old Barnsley Brewery site. A Pheasant calls. There are more Whitethroats here. Grasshoppers reel in the long grass. A Chiffchaff calls. Coltsfoot is already in seed, the large leaves that are used in herbal tobacco mixtures and cough cures will start to develop soon. I spy a small bird deep in a low bush. A decent view reveals a Garden Warbler – the first time I have ever found one without hearing the song first.

Monday 5th May – Grange Lane – Along the old railway track towards Cudworth. Robins are still dominating the songs, in volume at least. A Willow Warbler sings in a Goat Willow. There have been fires here as well as Willowbank. A large section has been burned off, but the recent rains mean grasses as emerged quickly and softened the black, ruined land. Bluebells have also risen and bloomed making islands of blue in the green and black. The fact the Bluebells survived indicates the fire was swift and hot, burning off the gorse and bracken and moving on quickly.

Home – The garden is splashed with many hues of green. Everything looks lush and in vibrant growth. A Great Tit is commuting between the peanut feeder and one of the nest boxes. I have put out a support net for the mange tout peas that are rushing upwards. The potatoes that were mere smudges of green leaf on the surface of the soil only a couple of weeks ago will need earthing up this week. Runner (Prizewinner) and French (Brighlingstone and Caseknife) beans, all saved seed, are planted into pots and put in the greenhouse. More lettuces (Tom Thumb) and cabbage (Derby Day) are sown in modules. Courgettes (Defender) and Pumpkin (Butternut) are also sown. More seeds will go in this week, but some serious weeding also needs undertaking. Greenfinches visit the feeder. A Robin alights on the stump of a branch on one of the apple trees and surveys the garden. A Jackdaw flies over. A couple of Long-tailed Tits slip through the shrubs. Overhead, the first Swallow I have seen around here this summer glides gracefully across the sky. The Horse Chestnut next door is in blossom, great candles of white. There is a Wren’s nest again on top of the potting shed door, but no sign it is being used.

Friday 9th May – Barnsley Canal – A Greenfinch sings in the hedgerow that edges a pasture beside Smithies Lane. It really is the most beautifully understated creature, its muted greens set off by just a slender wing bar of brilliant yellow. Willow Warblers and Whitethroats are singing all the way up Willowbank. A Long-tailed Tit sits atop a Hawthorn – unusual as they are normally hyperactive. A Chiffchaff calls from the dense thickets around the old pit head. There are numerous shoots of Himalayan Balsam rising up along the path side, sadly pushing out our native species. A female Chaffinch feeds in a low sapling. A fat Wood Pigeon lumbers into the air with rapid wing beats.

Tuesday 13th May – Fleets Dam – It rained in the night and the angry grey clouds promise more. Everything smells clean and fresh. Bright pink flower heads of Herb Robert stand above dense patches of Stinging Nettles. The huge leaves of a Giant Hogweed are developing. The white flowers of Garlic Mustard and Wild Garlic are everywhere. Two Grey Herons stand erect and motionless on adjoining empty fishing platforms across the lake. A lone Black-headed Gull circles the water in search of titbits.

Wednesday 14th May – Barnsley Canal – At the foot of Willowbank, by the canal is a tan coloured pony – just like the toy My Little Pony. It is lying on the grass and beside her is a tiny black foal, hardly bigger than Dill the Dog. A Whitethroat does its song flight across the entire width of the bottom of Willowbank. May is an appropriate name for the Hawthorn as it is now in full bloom; whole bushes and hedgerows coated in white blossom. A pair of Swifts drifts over the top of the hillside. A Cormorant in non-breeding plumage stands in a dead tree on the Loop. By the canal 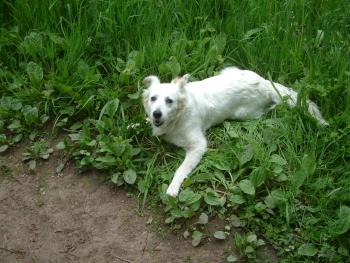 bridge is a red Hawthorn, its flowers a deep rose colour with a white centre. The Cuckoo Flower is in blossom, but no sign of its avian namesake.

Saturday 17th May – Barnsley Canal – Recent rain has resulted in near triffid-speed growth of all flora. Heavy steely clouds loom on the horizon. The air smells sweet and damp. Swifts scythe low across the tops on the Hawthorns. A Wren stands alert in the rushes. A male Blackcap is singing furiously, a jumbled mass of notes. Below a female feeds silently, slipping through the undergrowth like a ghost. Several Willow Warblers are competing in song around the foot of Willowbank. A lone Chiffchaff calls. Coots chatter down on the Loop. A pair of Mallard explode from the canal as Dill the Dog approaches.

Sunday 25th May – Rockley – A bright morning but rain clouds are rolling in. The woods around the old blast furnace and winding tower are intensely green. A Chiffchaff, Robin and Wren are all in song. Bluebells are coming to the end of their season and their brilliant blue is becoming faded. Pinks are taking over – Red Campion, Herb Robert and Common Storksbill. Pure white drifts of Wild Garlic stand by the steam. Over the road, in Rockley Farm, farmyard geese are cackling on a meadow by one of the two large ponds. A Moorhen scurries for cover between the sleeping Mallard. Coots are nesting. A Goldfinch sings from the electricity wires. The track crosses the stream over a modern concrete bridge. Beside it is the old stone bridge with ivy that dangles down the surface of the water. Swallows sweep low across a cattle pasture. A Grey Heron stands on the bottom branches of a willow overhanging the second pond.