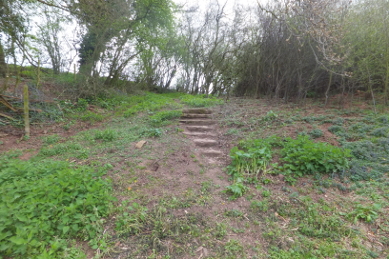 Friday 3rd May – Ryelands and Eaton Hill – The hoods and sheaths of the Cuckoo Pint are appearing, the flowering parts that give rise to the name of Lords and Ladies. Blackthorn blossom covers branches thick with lichens. Robins, Wrens, Skylarks, Chiffchaffs and Blackcaps sing. The big field above Hereford Road has been sown with clover. Ivington, Westhope, Birley and Burton Hills are looking soft and green in the morning air. Down to St Botulph’s Green and along Southern Avenue. Large continental articulated lorries are delivering tyres. Rows of tractors and harvesters stand outside John Deere. Along to the old railway bridge. The old oil lamp fitting on the signal has been replaced with a plastic one, however the signal is still mechanically operated. Trains pass, one to the far reaches of Wales, the other to Manchester. I kick Maddy’s ball which bounces and is then knocked by her high into the air and over the parapet of the bridge – lost. On to the old road crossing where the A44 and A49 cross, now replaced by the big roundabout and a new bridge. Daffodils and tulips flower beside the moss covered remains of the pavement. On over Eaton Bridge. The River Lugg flows slowly and muddy. There is a new gate into Eaton Hill, which is a relief as the old stile was very rickety and difficult for my old legs. Maddy is still expecting her ball and explaining she has lost it has no effect. Undergrowth has been cleared from the hillside and towards the top another short flight of stone slab steps has been uncovered. A Garden Warbler sings from a thicket. Along the top of the ridge. The big field looks like it has been lightly ploughed but many maize stalks remain. Widgeon Farm lies over the fields. Chiffchaffs and Blackcaps are plentiful along here. The sky has clouded over cut it remains pleasant. Up by the mobile phone mast is a field usually occupied by cattle but empty today. If Merewald did have a hall up on Eaton Hill in the 7th century it must surely have stood here. Although not a noticeable summit, it does have a wide and panoramic view of the area. A Yellowhammer sings in the far hedge. A murder of Ravens sails out over the fields. Down to Easters Meadows and back over the railway.

Sunday 5th May – High Offley, Staffordshire – Our annual pilgrimage to The Anchor Inn on the banks of the Shropshire Union Canal for a Bank Holiday meet with the Barnsley Buglers. The camp site is far more crowded than in previous years. After a night of snoring from every direction, Maddy and I head west along the tow path. There are large dried-up ponds in a number of fields but I wonder if they are not remnants from last year’s seemingly constant rain. One in the distance looks more 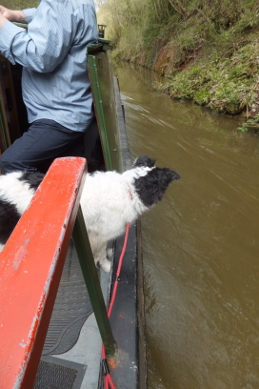 permanent with a couple of feral geese and a Shelduck. Carrion Crows and Rooks are moving constantly across the wide open vista. Skylarks sing from a grey sky. For some reason, a digger has been parked on one of the bridges over the canal. A pair of Reed Buntings chase through small Willows. On past Winding Hole where a crane stands on the dockside. A company making canal boat hoods and covers occupies the premises. A caravan site at Batchacre Park seems to be mainly taken over by pens of chickens, geese and guinea fowl. On to the old Cadbury’s wharf at Knighton. On the opposite side of the canal is a steep bank with a sewage works at the bottom. The west-side hillside keeps rising to another caravan site – a bit close to the sewage for my liking! This hillside is blue with Bluebells. On a short way through a wooded cutting where Blackcaps and Chiffchaffs call. On the way back, a Common Buzzard perches on a fence post. 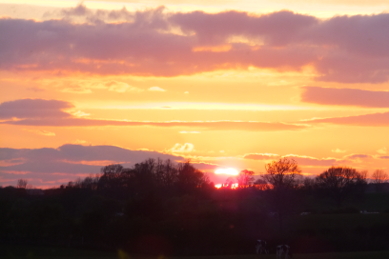 Shropshire Union Canal – After a late breakfast, we set off in the canal boat following the route I walked this morning. The sun has put in an appearance and it is a glorious afternoon. Yellowhammers call from the hedges. Mallard either swim past the boat or rise up and fly off. Plants with black, feathering flowers, probably sedges, grow along the edge of the canal. On the more wooded sections are Primroses, delicate Wood Anemones, Forget-me-nots and the inevitable and numerous Dandelions. Wild Cherries blossom profusely along the banks. The Wrekin stand in the distance, a great hump of a hill on the horizon. The long cutting from Cheswardine Road Bridge, under High Bridge to The Hollings is not the easiest of sailing. It is narrow with ledges under the water by the banks. We only meet one other boat. There are a number of landslips and recent repairs are in evidence. We turn at Tyrley Wharf and stop on the way back for the traditional enormous curry. Dave has excelled himself with a delicious lamb curry and chicken koftas in an achari sauce. Both Grey Herons and Cormorants are trying to fish on the canal and are disturbed by our passing. A Whitethroat stands on the tow-path hedge. In the evening a glorious gold and purple sunset adorns the western sky. 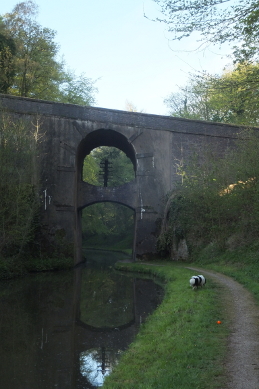 Bank Holiday Monday 6th May – High Offley – The Tawny Owl stopped hooting around the time that the first Blackbird started singing. I dropped off to sleep again and then awoke shortly after 5 o’clock to a cacophonous chorus. I take Maddy for a short walk eastwards up the canal. The white Rolls Royce I have seen in the woods for some years now has been replaced by a black model. We turn back at the bridge carrying the A519, with the telegraph pole in its circular centre. This is another High Bridge and it and the wing walls were built 1832-3, for the Birmingham and Liverpool Junction Canal Company, as the canal was called then, by Thomas Telford, principal engineer; William Provis, consulting engineer and contractor; and Alexander Easton, resident engineer. A strainer arch was inserted into the bridge in the mid 19th century onto which a telegraph pole (allegedly the shortest pole in the country) was placed in 1861 by the United Kingdom Telegraph Company. It is Grade II listed.

Tuesday 7th May – Croft – The sun shines down from a clear blue sky. Bird song rings around the woods. A Wren stands on a stub of an Elder, tail erect. Wild Arum hoods abound. Bluebells still have not come into flower and the Ransoms are still quite small. The woods are greening fast though. The Oak and 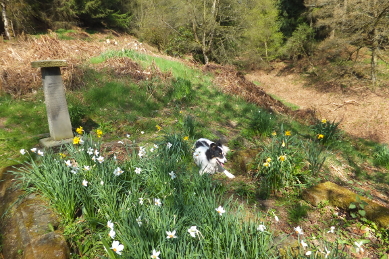 the Ash seem to be opening simultaneously this year, who knows what that means on terms of the old rhyme. The ground is bone dry but rain is forecast for later in the week but I grow more sceptical of weather forecasts these days – too many unusual atmospheric conditions due to global warming makes accurate forecasting ever more difficult. Still, sitting here on a mossy log with the birds singing and the sun filtering through the trees is good enough for now. I suddenly realise a Wood Warbler is singing his spinning coin song nearby. It is always good to hear this less common little bird. Up to Sir James Croft’s grave. The daffodils and narcissi are beginning to fade. Across the way, on the edge of the wood, where the conifer plantation has been cleared female Redstart is using a moss-covered stump as a launch pad for chasing insects. Out in the clearing the Bluebells are coming into flower and one is being visited by a Black-veined White butterfly. The clearing of the conifers has left an open woodland off ancient Oaks and mature but much younger trees which are clearly popular with Blackcaps, Chaffinches and tits. Down the Spanish Chestnut field. The Spanish Chestnuts are some way behind the Horse variety in leaf production. Maddy is unhappy that cows are congregated around the gate to the lower field but scurries past when I tell her to go on.

Stockton – Sitting on a corner where a track bends as it crosses the hill above Stockton. The field here is yellow with oilseed rape. A Song Thrush sits atop an Oak in the hedge across the field. A smaller bird sits next to it but is just a silhouette. Jackdaws rise to escort a Common Buzzard away. I am here to undertake a survey for the BTO and Game and Wildlife Trust on Woodcocks. It is a 75 minute snapshot across sunset. A little later the Song Thrush has departed and its perch is being attacked by a Great Spotted Woodpecker. The sun sets at 8.45 and the light begins to fade. The birdsong also fades away leaving the alarm calls of Blackbirds and constant baaing of sheep. The church bells toll, or rather clank out 9 o’clock. Not a sign of a Woodcock. By 9.30 it is getting quite dark. The Blackbirds have given up but a few Song Thrushes persist with bursts of song and Carrion Crows still argue. The first Tawny Owl hoots in the distance. As it darkens and quietens, the noise of traffic on the A49 becomes more obtrusive. A pair of Mallard fly over, quacking quietly. By 9.45 stars are appearing and the birds have fallen silent. A pleasant interlude, but no Woodcocks. 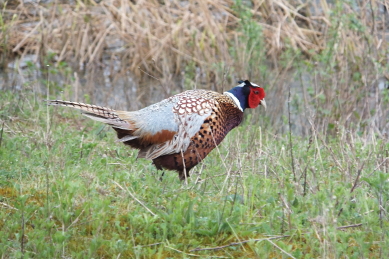 Wednesday 8th May – Bodenham Lake – Rain fell heavily during the night, much welcomed by the garden. Dark clouds linger this morning with occasional bursts of sunshine. A blustery breeze has sprung up. The air is fresh and clean. Bird calls greet my arrival, Green Woodpecker, Chiffchaff and the ever present Canada Geese. Along the track to the boat houses where Blackcap and Willow Warbler join the choir. Through the Alder saplings where the air, out of the wind, is stiller and full of gnats. There is little on the water, a few Mallard and Tufted Duck along with the Canada Geese. A single Cormorant sits on the pontoon. There is little growth in the reed beds, worrying as Reed Warblers will be nesting soon. A magnific