Tuesday 1st September – Leominster – Mid morning and over a dozen Swallows are sweeping across the Grange just inches above the ground. Summer is passing. Everything is beginning to look tired, leaves dull and drying, soon to be yellow and brown. Apples on the small trees in the Millennium Meadow are fat and shiny. Juicy purple Elderberries shine from the hedges. Rosebay Willowherb lets loose its feathery white seed bearers.

Home – Fruit is ripening fast. Plums and Damsons are hanging heavy from their branches, dull with the pale covering a yeasts. The raspberry canes have grown to over six feet tall and are pressing the top of the fruit cage upwards. The thornless blackberries are beginning to ripen to a shiny black. Bramley apples have swollen with the recent rains and pull the branches low. They have cropped well, which is a relief as the Howgate Wonders have failed entirely. The last two figs are gently plucked from the tree – they have been prolific. Cabbage White butterflies have managed to lay and hatch eggs on the cabbages and purple-sprouting despite my vigilance and some leaves are now green lacework. Courgettes keep coming one after another. The runner and French beans are now beginning to slow. There is a good crop of sweet and chilli peppers in the greenhouse.

Wednesday 2nd September – Home – A dull day with rain threatening. Cropping fruit continues. Several pounds of plums come off the branches overhanging our garden wall. On the other side there is an overhanging damson which provides another four pounds of fruit without much effort. The plums are bottled in a medium syrup and the damsons are being turned into chutney – a Delia recipe. It better be good because there is a large quantity soon to be bottled. I had cut rings of plastic out of 2 litre bottles to act as slug deterrents around some lettuce seedlings. Somehow one has got into the chicken run and Ginger is wearing around her neck. Fortunately, she does not make much effort to run away when I grab her to remove it. Jill is still broody but finally the other hens are using the second nest. A Robin sings from the shrubbery and a Chiffchaff is calling nearby. 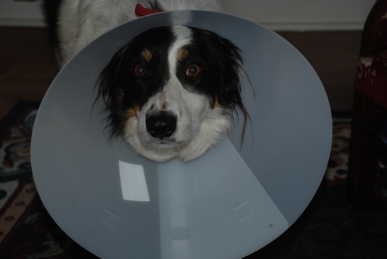 Saturday 5th September – Home – It is getting more autumnal by the day. The mornings and evenings are decidedly cooler. Maddy has been spayed and has a large sewn up wound down her stomach. She is being very good about it; it is obviously irritating her and she wants to lick it but stops whenever she is told to do so. At night she has to wear a buster collar or a bucket as we always call them. She looks disgusted when it is put on but we cannot afford to let her interfere with her stitches. I have been making Damson Cordial. The first batch is a bit too sweet, so less sugar on the next. There is still another tree of damsons to be picked yet and then I had better start on the apples. The beans are finally coming to an end – the remaining French beans can be left to dry now and the runners will be cropped and made into piccalilli. It is onto hands and knees in the damp grass to weed the raised beds – a never-ending task. The Chiffchaff is still calling from the fruit trees.

Thursday 10th September – Ledbury – It is the week of the Heritage Open Days when many normally closed old buildings are opened to the public. We head to Ledbury, a delightful town to the east of Hereford, a few miles from the Worcestershire border. The town centre is a mixture of mediaeval timber-framed black and white and Georgian buildings. The first we visit is the imposing Market House dating from the 17th century. The building is a 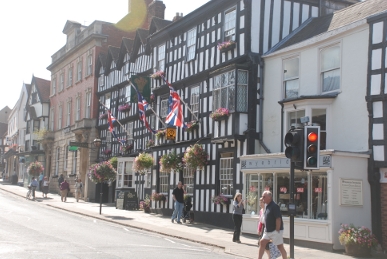 timber-framed hall standing on 16 wooden stilts. It was started in 1617 after John Phillips, a clothier, raised £40 by public subscription. It is thought to have been designed by John Abel although it lacks his characteristic ornate finish. This may well be because the building took years to finish, the money ran out in 1655 and money from bequests for clothing for the poor was used to complete it in 1668. To compensate the bequests it was stipulated that money from rents would be used to buy 12 sets of clothes each year. The Market House was used a corn store for only a few years because the introduction of turnpikes meant tolls were levied on corn being brought into the town. So traders would only bring a small sample of their corn instead of paying for storage and the road tolls. The attic would have been a storage area once, but the floor has been removed exposing the beautiful oak beams. A declaration of the ascension to the throne of Edward VII in 1901 and a letter acknowledging the Council’s loyal wishes to the new king are displayed on the wall. Opposite is the impressive site of St Katherine’s Hospital Almshouses, built in 1822 by Sir Robert Smirke.

By the Market House is a cobbled lane, Church Lane leading, obviously, towards the church. A fascinating little museum resides, Butchers Row House Museum containing many items, mainly of Victorian life. The house originally stood in middle of the High Street but was demolished around 1830 and re-erected in 1979. Just up the road is the Heritage Centre, another fine timber-framed building that has been a guildhall, school and tenement block. A huge smoking chimney stands at one end. Beside the hearth is a glass cover to a hole which shows an old, dried up water course many feet below. Upstairs the massive roof timbers can be seen. 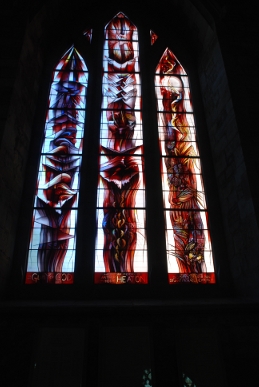 At the end of Church Lane are gates through which stands the Parish Church of St Michael and All Angels. Liedeberge, a fortification on the River Leadon, was chosen as a site for a minster church by the Bishop of Hereford in the 8th century. The building is sited to the south of churchyard, which is unusual and being the lowest lying area may indicate that a stream ran through here, which in turn may well mean the church was built on top of a pagan site. The stone church, then known as St Peter’s, was probably constructed in the early 12th century. Changes and additions continued until the 15th century when the church was in the form now seen. The tower is a separate building, the lower three sections being constructed around 1230 but the spire not until 1733. There is a lot of good glass in the windows, mainly Victorian, much by Charles E. Kempe, but there are also some later gems. The Heaton memorial window is by John Clark and was installed in 1991. It contains references to the lives of Arthur and Biddy Heaton – a cricket bat and ball, a Mother’s Union badge, a family pet etc. The westmost window is a design by Sir Joshua Reynolds. Another is a representation of the Good Shepherd, designed by Edward Burne-Jones and made in the William Morris workshop in 1913. Standing in the nave and looking towards the sanctuary there is a red light in the roof. This is a small red glazed window, installed at the time of the Reformation when it was forbidden to hang red sanctuary lamps. It is believed to be unique! There are several fine memorials as well as numerous slabs in the floor. A pure white marble baby being watched over by angels commemorates the infant John Hamilton who died in 1851. In the sanctuary is the Skynner tomb, a monument to Edward Skynner, who died in 1631, three years after his wife Elizabeth. Between them is a baby girl that legend states was killed by the last wolf in the district. In the south aisle there is also a marble and gold plaque to Captain Samuel Skynner, who by no mean proficient in Maritime affairs; having been conversant therein for near forty years and who died in 1725 at the age of 73 years.

Friday 11th September – Hereford – The Heritage Open Days continue. Hereford station, like most public transport buildings, has a tired, unloved look about it. The flowers in the hanging baskets cannot make up for the overall dullness. Some of the seats have GWR in the ironwork leg ends, over 60 years old. The main building is brick with stone gothic features. In what seems another relic of the old times, a platform worker blows a whistle and waves a paddle, rather than a flag, for a train to depart, despite the guard standing about ten feet away and the train only being three carriages long.

My first visit is to the Shire Hall, where the courts sit. Despite signs indicating that it is open for the Heritage day, there is no-one around and no indication what there is to see. One corridor which appears to lead to the courts and anything of interest is roped off. Stairs lead to a concert hall, although there is no information available. The walls carry large portraits of royalty and local worthies. A semi-circular stage has tiers rising to the back. Marble pillars support of flat dome ceiling. Beside the stage is a raised box for the master of ceremonies.

It is then on to the Town Hall where much more effort has been made. Men in usher’s uniforms guide the visitor to the Mayor’s parlour where a former mayor shows the mayoral chains, photographs and other memorabilia. Two swords hang on the wall – the Sword of State, which is over 300 years old and is borne before the mayor on civic occasions and the Mourning Sword which is only used on the death of a sitting mayor (which has not happened since the turn of the 20th century) and on the death of the monarch, again not for nearly 60 years. The Mourning Sword is 15th century and was used at the Battle of Mortimers Cross in 1461 (although the councillor expressed her doubts regarding its age). It is noticeable that much of the silver and memorabilia has been presented by local regiments, which contrasts with Barnsley’s collection which has strong connections to local industry, especially mining. Banners on the walls of this room and the council chamber are from the military; in Barnsley they are NUM banners. A statue of Lord Nelson is in the council chamber. He was made a Freeman of the City in 1802. The carpet is pale blue with the Lion of England carrying a sword, the symbol of Richard I – apparently only allowed to be used because the Lionheart presented a charter to the city in 1189. Above the main staircase is a beautiful stained glass dome in the Art Nouveau style, the Town Hall being built in 1904. The pillars by the stairs are made from